With that move, the Rangers have an open spot on their 23 man-roster limit. They currently have two players on IR in Sammy Blais (season ending ACL surgery), and Kaapo Kakko (upper-body), who is reportedly several weeks away from returning.

That does pose an interesting question, is there another move coming soon?

Jones, 21, has certainly shown the Rangers brass he belongs in the NHL (and other GMs). Playing third pair minutes, the left-handed rearguard has been solid by moving the puck quickly, displaying some offensive ability, and using his small size well in the d-zone.

“We know what Jonesy is,” Gerard Gallant said recently. “He moves the puck– he skates. He’s not a big guy but he defends pretty hard.”

In 8 games this season with the big club, he has an assist to his credit while averaging 14:09 per game. For his career, Jones has five points (all assists) in 18 contests.

The Wolf Pack next play on Friday, so this could just be a paper transaction with a call up before the Rangers next game against the Washington Capitals on Thursday. Or Chris Drury may have a minor deal in the works and is preparing an open spot on the roster for the transaction.

Yesterday, Ryan Dzingel was claimed off waivers by the San Jose Sharks, could the Rangers offer a late round pick for his services? The other possibility is a smaller deal that maybe involve the Senators’ Nick Paul? The solid forward played for Gallant at the WJC this past summer.

It’s more likely that Jones gets called back up, but as the NHL Trade Deadline looms closer we can’t rule out a trade from the equation. 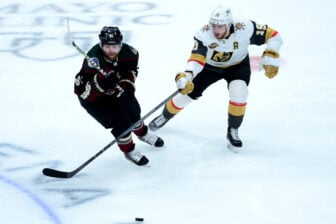