The Pittsburgh Penguins will have to start their playoff series against the New York Rangers without number one goalie Tristan Jarry.

Penguins without Jarry and Zucker vs Rangers

“We don’t expect to have them for the first couple of games, I will say that,” Sullivan said. “But their status right now is day-to-day. We’ll update you guys as we go.”

Jarry last played against the Islanders on April 14. He was seen in a walking boot soon after. Zucker was hurt against the Oilers last week.

That means backup Casey DeSmith will play at least the first two games against the Rangers. The 30 year-old posted solid numbers with a 2.79 GAA and a .914 SV% for a 11-6-5 record this year.

Meanwhile, the New York Rangers will have a full lineup as both Artemi Panarin and Andrew Copp were announced a go for Game 1. Both players missed the team’s last two regular season games with minor injuries.

“They had a great practice and no issues,” Gerard Gallant said on Sunday. “They’re as official as everybody else out there, put it that way.” 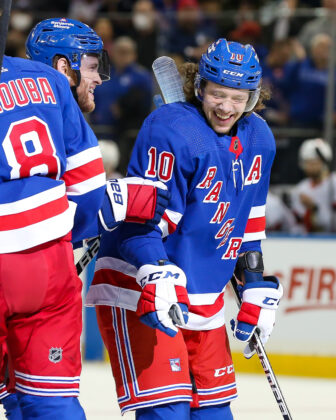 Latest on the Montreal Canadiens and Brendan Gallagher. Plus it sounds like Jakob Chychrun wants out of the desert and teams are looking to hire Joel Quenneville. Read more.