In Toronto, the Yankees outfielder finally crushed one over the left field wall and tied Roger Maris’ record of 61 home runs.

On a 0-2 sinker, Judge watched the ball come in over the middle of the plate and did what he has done 60 times before. With a smooth but powerful swing, he cranked one over the wall to become a Yankees legend.

Judge, 30, is having a season for the ages. He currently has 61 home runs with 7 more games to get 62. His batting average is .313 with a 130 RBI and he has a chance to win the Triple Crown. The last player to pull off the feat was Miguel Cabrera with the Detroit Tigers in 2012.

“Pretty incredible,” Judge said. “There were a lot of things Babe Ruth did that I definitely couldn’t do. But to get a chance to sit at 60 for a while there with the Babe was nice. To get a chance to now sit at 61 with another Yankee right fielder … it’s pretty cool.”

After Judge hit his historic blast, the New York Rangers shared a photo of him at Madison Square Garden from last season sporting Broadway Blue.

All it said was:

Honestly, that’s all that needed to be said. 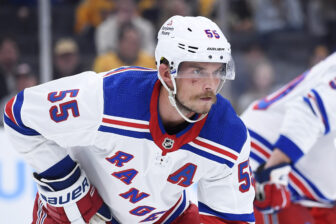