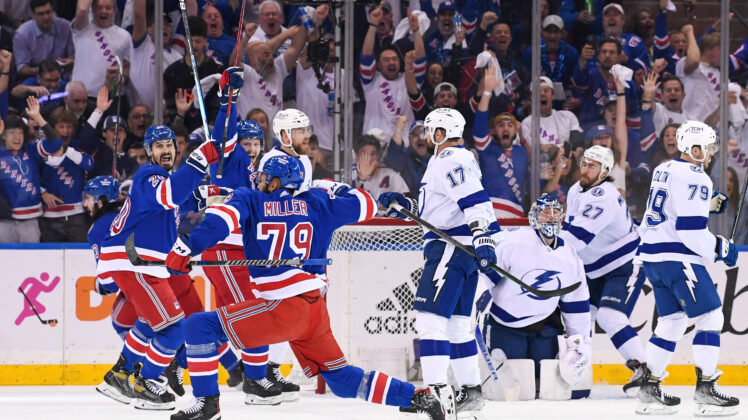 Madison Square Garden was rocking from the opening faceoff as the New York Rangers and Tampa Bay Lightning went at it in Game 2.

With the crowd behind them, the Blueshirts took it to the Bolts and did something no team has been able to do since 2020– beat them two games a row in the playoffs.

The Rangers will now head to Tampa for Game 3 on Sunday afternoon looking to grab a 3-0 series lead in the Eastern Conference Final.

“We’ve said it all year, the belief in the room is high and outside opinions don’t matter,” Adam Fox said. “We’re not thinking about what streaks other teams have.”

The Lightning would actually get on the board first in this contest after an awful call by the referee on Ryan Reaves. He and Pat Maroon were going at it before the draw, but the ref opted to only call Reaves for a slash.

Nikita Kucherov would score just 10 seconds later on the man-advantage.

New York was not deterred as they kept coming in waves with speed up the neutral zone.

Flying up the zone, Chris Kreider got it cross-ice to Frank Vatrano. Speeding over the blue-line he got the Tampa defense to back up as he fed K’Andre Miller coming in late. His first shot was blocked but it came right back to him and he snapped the puck by Andrei Vasilevskiy to tie it 3:18 later.

“I can tell you right now there’s a lot of smiles in the locker room,” Miller said on MSG. “We stuck to the game and did what we needed to do to win this game. We’re really happy.”

The Kid Line once again was a lot for Tampa to handle 5-on-5. Cycling the puck with Adam Fox, they generated two big chances. First, Fox fed Alexis Lafrenière at the doorstep that Vasilevskiy stopped. New York’s best defenseman was able to get the puck again feeding Kaapo Kakko for a tip in.

“Adam Fox put on a show. He was the best player on the ice,” Mark Messier said on ESPN. “He reminded me of Brian Leetch with the way he controlled the entire period.”

Mika Magic and the Rangers hold on

The second period was scoreless with the Rangers getting the better of the play and chances.

That carried over into the third period where Mika Zibanejad blasted one over Vasilevskiy’s blocker. It was a huge tally on an odd man rush that gave the Rangers a big two goal lead 1:21 in.

Tampa played desperate for the remainder of the period and pulled Vasilevskiy with more than 3 minutes remaining. Nick Paul cut the lead to 3-2 with 2:02 left in the contest.

The pressure continued with the extra man and the game was almost tied if not for a big block by Jacob Trouba on Steven Stamkos followed by a chest save from Igor Shesterkin.

“We knew we had to put out a solid defense and block the puck,” Shesterkin said, “I had a strong belief in the guys in front of me that we would keep the score 3-2.”

After the final buzzer, New York grabbed a 2-0 series lead in the Eastern Conference Final.

“They weren’t going to quit. They took it to us and Shesty made some big saves for us,” Gerard Gallant sighed with relief. “We battled and we found a way.”

The Arizona Coyotes have hope as Tempe agrees to negotiate on new arena. Read more.