The New York Rangers are right back at it on Monday night facing the Metro Division’s last place team, the Columbus Blue Jackets.

After falling to the Montreal Canadiens on home ice Sunday, who are in last place in the Atlantic Division, the Rangers better have learned their lesson. You simply can’t put forth the effort they did and expect to win in the NHL even against lesser opponents.

“The energy level didn’t look great,” Gerard Gallant said. “Whether it’s [the stomach bug going around the team], I don’t know. I’m not going to yell at them and scream, ‘What’s going on?’ But we expect better from our group.”

When the New York Rangers step out on the ice against Columbus, they need to do so with a level of urgency on both sides of the puck. New York fired 39 shots against the Canadiens last night, although not many were high quality. However, the real issue was their lack of desire to get back and play some defense.

That led to a number of high danger chances against in the first period alone. It’s notable that the eventual game-winner by Cole Caufield was a result of careless play with the puck in their own zone with too many bystanders not picking up a man.

The Rangers played the game without two regulars as Julien Gauthier was placed on IR, and Chris Kreider remains doubtful with an upper-body injury. Even if they had suited up, I’m not sure it would’ve made a difference. Yesterday was clearly a night where the team as a group had very little interest in skating hard to backcheck or forecheck.

“It was a little more sloppy than what we want,” captain Jacob Trouba said. “They were fast, they didn’t make it easy.”

Since this is the second match of a back-to-back set, Jaroslav Halak will be the starter in net.

Defenseman K’Andre Miller is riding a 7-game point scoring streak with 3 goals and 5 assists in that span.

The Habs snapped the New York Rangers point streak of 7 games. Although New York is 14-4-3 since a three-game losing streak in late November.

The Columbus Blue Jackets are not a very good hockey team. That being said, they still have players who can beat you if you decide that defense is optional.

In their last game on Saturday, Patrik Laine posted a hat trick to beat the Detroit Red Wings 4-3. They also have Johnny Gaudreau, who set up two of those Laine goals, and he can burn you at any time.

Of course, potting a bunch of goals isn’t the Jackets forte as they have the lowest total of GoalsFor in the Eastern Conference with just 109. To compare and contrast, the Rangers have 141 GoalsFor, 19 behind conference leader Boston Bruins (160).

Furthermore, the Jackets are just 5-15-0 in their last 20 games. Basically, everything about this matchup screams “TRAP!”

If the Rangers are truly contenders, not only will they avoid it but they’ll make a statement that last night was really an aberration. 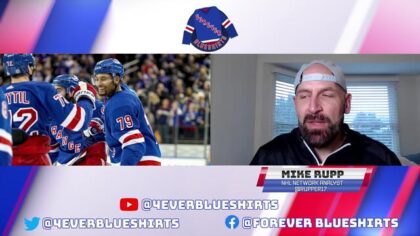