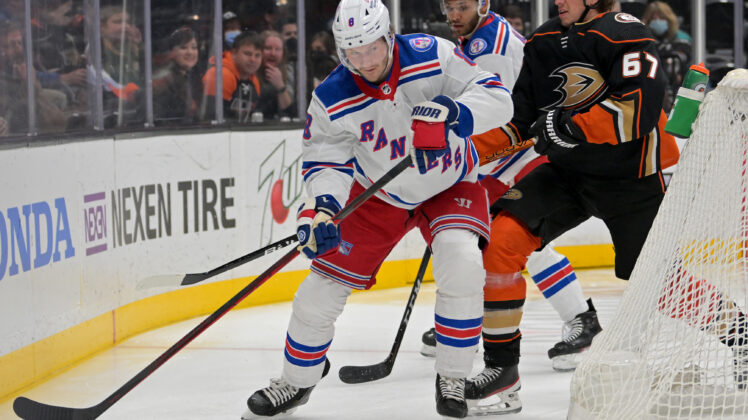 The New York Rangers are getting ready for a two game home stand that starts on Tuesday against the Anaheim Ducks and concludes on Thursday versus the New York Islanders.

Tonight’s opponent is an intriguing one, as they have one definite and possibly three trade targets Chris Drury may be interested in. Rickard Rakell, who was held out of the team’s last game with an “upper-body” issue is reportedly the team’s top trade candidate.

Two others are defenseman Hampus Lindholm and forward Max Comtois. The former is likely going to re-sign with the Ducks and the latter needs a fresh start.

To further add to the curiosity, Anaheim made a trade on Monday sending pending UFA defenseman Josh Manson to the Colorado Avalanche for prospect Drew Helleson and a 2023 second round draft pick (plus 50% salary retained).

Could another deal be on the horizon? This time with the Rangers? We will see, as I doubt Ducks GM Pat Verbeek would want to face a freshly traded player.

All season, the New York Rangers have demonstrated an ability to produce wins despite slow starts.

It happened again Saturday against the Dallas Stars, and now the Rangers will look to get on another roll when they host the Anaheim Ducks on Tuesday night.

New York is 14-14-3 when allowing the first goal. The Rangers also own 19 comeback wins, tied for the league lead with the Colorado Avalanche and Columbus Blue Jackets, and their nine wins when trailing after the opening 20 minutes are the most in the NHL.

Artemi Panarin scored and collected four assists for his third career five-point game as the Rangers produced an impressive response to a slow start, especially after being outscored 11-4 in lopsided road losses last week against Minnesota and St. Louis.

“I think the one great thing about this team is that it comes from within ourselves,” New York’s Dryden Hunt said. “We have a lot of pride in that room. It was tough to lose those two games — not just losing, but the way we lost. We just had no response, so it was nice to play the way we did.”

“That’s been a staple for us,” New York forward Chris Kreider said. “I think that level of poise, knowing that the other teams got good players, they’re going to make plays, stuff’s going to happen.”

“They’re doing their rehab and it’s still week-to-week,” he said. “It’s not going to be this week for sure.”

Kakko, 21, last played on January 21 against the Carolina Hurricanes. Television cameras caught Kakko wincing in a lot of pain and discomfort at the end of the second period as he was flexing his his left arm. He was placed on IR the next day and is still recovering.

Rooney, 28, has 11 points in 51 games this season and has been an integral part of the Blueshirts’ physical fourth line with Ryan Reaves. The injury occurred on March 2 and the Rangers sorely miss his checking abilities.

The Rangers were hoping Kakko would be back this week before the NHL Trade Deadline, next Monday. 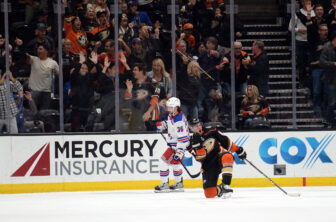 Ducks falling far out of the playoffs race

After opening its five-game trip with by getting outscored 12-4 in losses to Chicago and Nashville, Anaheim dropped a pair of one-goal games to the New Jersey Devils and New York Islanders. On Saturday, the Ducks took a 2-1 shootout loss to New Jersey and followed it with a 4-3 setback to the Islanders.

Recently traded Josh Manson, Isac Lundestrom and Adam Henrique scored for Anaheim, which took at least 40 shots for the third time. The Ducks matched their highest total despite playing without Rickard Rakell, whose upper-body injury might keep him sidelined Tuesday.

“It’s a challenge,” Ducks defenseman Kevin Shattenkirk said. “We’re a young team as it is, so you look at some of the key guys we have out who play key minutes for us, fill key roles in our locker room.”

The Rangers are 10-2-1 in the past 12 meetings and scored three times during the third period in a 4-1 victory Jan. 8 in Anaheim.

The latest Trade Bait Tracker has been updated. Check out who is the top target for teams with just one week before the NHL Trade Deadline. Read More.