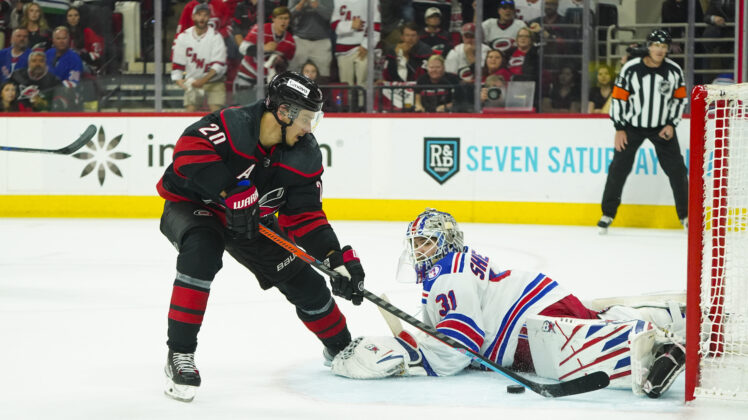 The New York Rangers were playing an excellent road game, until the third period.

After taking an early 1-0 lead, the Blueshirts really did an excellent job of quickly getting pucks out to disrupt the Hurricanes aggressive forecheck. They were able to do it for two periods to perfection but the Canes would get a Sebastian Aho goal late in the third to tie it.

Then it was a harmless shot from Ian Cole that deflected off Ryan Lindgren to give Carolina Game 1.

“We started sitting back a little too much,” Mika Zibanejad said. “They got their push, they got their goal and won in overtime. There’s a lot we can take away from this game.”

Filip Chytil opened the scoring at 7:07 of the first period.

Shortly before the goal, the Hurricanes had dumped the puck in the New York zone. Shesterkin stopped the puck behind the net and sent it up the wall.

Vincent Trocheck and Tony DeAngelo were both along the wall, but neither could keep the puck in the New York zone before DeAngelo tried to pass it back to Jaccob Slavin in the neutral zone, but it was stolen by Alexis Lafreniere.

Lafreniere brought the puck down the left side before centering it to Chytil, who scored with a one-timer before Raanta could slide over.

“We can take a lot of positives and build on this game,” Chytil said. “We’ve been in this position [before].”

The Rangers out-shot Carolina, 12-8, in the first period.

The Rangers were outshot 8-0 over the 11:19 minutes of the third, although Kaapo Kakko had two good chances to pad New York’s lead down the stretch.

The Hurricanes turned the puck over in the neutral zone, leading to a 2-on-1, but Kakko stumbled as he shot the puck. He then missed an open net with 6:44 remaining.

Sebastian Aho scored the tying goal late in regulation for Carolina, and Antti Raanta made 27 saves. The Hurricanes won the Metropolitan Division title by six points over the Rangers this season.

Ian Cole scored 3:12 into overtime to lift the Carolina Hurricanes to a 2-1 win against the New York Rangers in Game 1 of their second-round Stanley Cup playoff series on Wednesday in Raleigh, N.C.

“Definitely a tough loss but we’ve been there, done that, got to battle back,” Gerard Gallant said. “The first two period were perfect hockey for us, I thought it was the best game of the year.”

Game 2 is set for Friday night, also in Raleigh.