The New York Rangers offseason is going to be an active. From hiring a coach, to a potential blockbuster trade, and scouring the UFA market, Chris Drury is going to be extremely busy.

When you look at the team, one of their best moveable assets is Filip Chytil

One of Drury’s top priorities is reshaping the bottom six of his lineup in order to diversify the way the Rangers play. Currently the Blueshirts top three lines are a mirror image of each other with just different degrees of skill. This summer they will be looking to have a lot more bite on their third line which is currently centered by Filip Chytil.

As trade talks around the NHL start to pick up, one Blueshirt that seems to be persistent in them is Chytil. Although he has the size, Chytil does not use it in a physical manner. However, his potential to become a top six forward has teams keeping tabs on his availability.

Chytil may very well be one of the key pieces moved in a trade for a center this summer. That includes Jack Eichel, Aleksander Barkov, Evgeny Kuznetsov, or Sean Monahan. It does not appear the Rangers would move both Ryan Strome and Chytil in the same deal for a center. If Strome is moved for another 1A pivot, then Drury could use Chytil in another trade to get size and grit for the third line.

At the end of the day, Chytil is emerging as one of the most likely candidates not to be here next year. 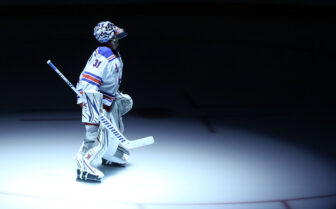 Rod Brind’Amour has yet to sign the Hurricanes offer from April. Will he be leaving? Read more.