The New York Rangers will drop the puck on the 2021-22 NHL season against the Washington Capitals tomorrow night. As with any new season, there is a ton of promise and hope going into it.

Like many teams, the Rangers have plenty of questions that need to be answered. Those answers will determine short and long-term success. Let’s dive in and try to answer them.

What impact will the new additions have?

If the preseason showed us anything it’s that Barclay Goodrow, Ryan Reaves, Sammy Blais, and Patrik Nemeth have already had an impact on the New York Rangers.

Yesterday, Goodrow was added to the Rangers leadership group. He was announced as one of the six alternate captains. GM Chris Drury brought him in to change the dynamic of the third line and provide some Stanley Cup experience. He’s slated to play on a line with Filip Chytil and fellow new comer Sammy Blais to start the season.

Blais, 25, has looked great in the preseason and may have a home on the second PP unit. He plays a similar role to Chris Kreider on the first unit by standing in front. This season, he will shift between the third and fourth line until Drury clears roster space to bring up Vitali Kravtsov full time.

As for the 34 year-old enforcer Ryan Reaves he’s had an impact with his teammates. The video of him teaching Kravtsov the finer points on fighting was just a brief glimpse into how he’s viewed by the players. His presence alone seems to have changed last season’s narrative that they are easy to play against.

Can the Rangers get off to a fast start?

Every team would like to get off to a fast start. Sometimes that is the difference between making or missing the playoffs in a tough division.

The Rangers looked resilient in preseason action, but the last two games showed an ability to score and play hard. Although Gallant’s system is supposed to be a little easier than Quinn’s, there will still be some growing pains.

Staying healthy is a given, but Igor Shesterkin will be the key to the Rangers getting off to a fast start this season.

Also Read:
Details on how to watch and stream all New York Rangers games this season

Sammy Blais’ strong preseason has eased the pain of basically giving Pavel Buchnevich and his production away for pennies on the dollar. The 26 year-old right wing scored 20 goals and 48 points in just 54 games last season. Blais will not even touch that level of production (.88 points per game) on the bottom six.

The key to having two strong top lines resides in two 20 year-olds. Alexis Lafrenière and Kaapo Kakko will need to produce like top six forwards. What many want to know is if they can?

Anyone who watched them during preseason must have a really good feeling heading into the 2021-22 campaign. Especially anyone who fixated on Kakko’s every move.

Kakko was extremely strong on his skates but displayed another gear speed wise. That was highlighted by a breakaway goal that left PK Subban in the dust. If he can drive to the net playing with Strome and Panarin he could be a shoe-in for 25 goals and 50 points.

Meanwhile, Lafrenière has all the maturity and tools to succeed in his sophomore season. Playing with Zibanejad and Kreider should result in a strong year as well.

Will the Rangers name a captain?

Yesterday’s announcement that Gerard Gallant did not want to name a captain left many in shock. I mean they talked about it the whole summer and said they were going to do it. So why didn’t they?

Here’s my take, I don’t expect the Rangers to name a captain this season. If you listened to what the head coach said, he seems to prefer not to have one.

“We’re going the route I took before in my past experience (Vegas), where we had six alternates” Gerard Gallant said. “Me, and [GM Chris Drury], and the coaches had a lot of discussions over the last three weeks but this is the direction I feel the most comfortable with.” 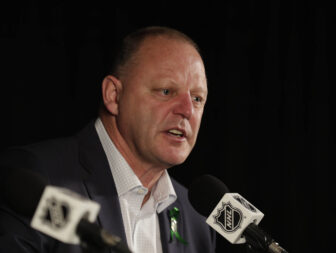 Also Read:
Gerard Gallant made final call to not name a captain for the Rangers

Will the Rangers move Ryan Strome and Alexandar Georgiev at the trade deadline?

Prior to the Zibanejad’s extension, I spoke with a source on October 7th, who told me that the Rangers were only in on Eichel until Mika’s deal was done.

Upon the announcement of the deal, I checked back with my source to see if the less than expected AVV from $10M to just $8.5M would keep them in the running for Eichel. It was made clear to me that with both Adam Fox and Kaapo Kakko coming off their ELCs the Rangers are out.

Additionally, it was explained that it should also mean the end of Ryan Strome’s tenure with the Rangers as well as backup Alexandar Georgiev. Those two players total $6.925M against the cap. That will be used to in the future on other RFA’s and to fill out the roster, including a new back up goalie in 2022-23.

The Rangers are hoping that Chytil can take over as the 2C, and Morgan Barron can emerge to claim a spot next season. Gerard Gallant can also use Goodrow to the center the third line if Barron is better suited for fourth line duties.

But will the Rangers trade these players in season? Georgiev is going to be available to the right team at the right price all season. As for Strome, unless the Rangers are out of playoff contention at the trade deadline, they will keep him all year.

From the quest for the Lightning to three-peat to Jack Eichel and everything in between. Read more.