New York Rangers Insights: Eichel trade or Zibanejad extension; Fox contract; and Trouba will be the next captain

The New York Rangers are in the news again with regards to Jack Eichel as multiple reports indicate progress is being made on a trade. Darren Dreger noted in a follow up report that his Rangers source says they are not in it. Meanwhile, Nick Kypreos, who has ties to the organization reported they indeed are in the mix. His report backs mine from the weekend.

Following up on the conflicting reports, my source indicated that Chris Drury would rather misdirect than tip his hand. So while the Rangers are indeed in the mix, I learned this important tidbit late yesterday.

Rangers will be in on Eichel up until they sign Zibanejad

The Blueshirts are making sure that one way or another an elite center will be a member of the team come next season. Whether that will be Mika Zibanejad or Jack Eichel remains to be seen.

According to a source with knowledge, the Rangers will be in on Eichel up until they sign Zibanejad.

Multiple reports indicate that the Rangers and Zibanejad have already started negotiations on a long-term deal. The unknown is what the AAV will be. Based on speculation out there, Zibanejad is looking for a number around $10 million and the Rangers are trying to get him in at $8 million.

Consider the Rangers interest in Eichel as an unspoken bargaining chip that Chris Drury has in his back pocket. The Rangers could acquire the Sabres disgruntled 24 year-old center without cap issues this season. So there would be no rush to trade any top salary to make room for his $10M AAV.

The cap issues will come next season with both Adam Fox and Kaapo Kakko coming off entry-level deals too. Keeping both Eichel and Zibanejad on the books would put a strain on their cap situation, and likely open them up to an offer-sheet.

When I asked if it was possible to keep both, there really was no easy way to do so. 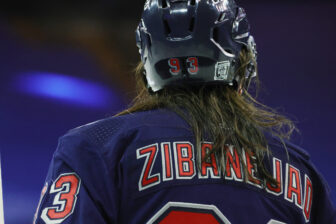 That leads me into the reigning Norris Trophy winner, Adam Fox.

When I offered the possibility that the Rangers maybe go with a bridge deal to save some cap space, that idea was squashed pretty quickly.

“His agent isn’t known for discounts,” the source responded. “Why would he, since he just won the Norris and seeing what everyone else is making.”

Back in June, when I asked if Fox would sign an extension this summer the response was “no rush.” That was before Cale Makar inked his 6 year deal worth $9M a season.

So what will Fox next deal come in at? “At least nine,” was the answer.

Jacob Trouba will be the next captain

The Rangers are going to be naming a captain this season. That’s been made clear by Chris Drury before the start of camp and by Gerard Gallant repeatedly during it. So who will it be?

Chris Kreider garnered a lot of attention last night with his willingness to get some form of retribution for Ryan Reaves’ injury. We know he is certainly in the mix, but Jacob Trouba has been talked about by people as the likely next Rangers captain, including Joe Micheletti during the broadcast.

“It’s cleary going to be Trouba,” I was told, “I’d be shocked if it was anyone else.”

The Rangers veteran defenseman is only 27, but he’s played 8 NHL seasons and is someone players look up to on the team. He expanded on his leadership role and what the current group is trying to do early in camp.

“I think I’ve grown in that aspect. There’s been so much change even from when I came in to now Hank (Lundqvist) being gone, and Marc (Staal) being gone.” Trouba began. “It’s not something you can easily turn the page from.”

“We’re not starting from scratch, but we’re trying to build our team, our culture, what our team does – our identity. That’s a part of it,” he said. “I think we have more than one leader, and it takes more than one leader to lead a team. It’s not just one guy out there hootin’ and hollerin’… just one guy talking doesn’t do much from a leadership standpoint. It takes all 23 guys to build a winning attitude.” 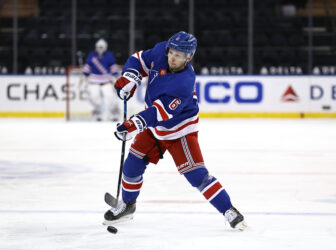 Carey Price will miss at least the next 30 days as he enters the player assistance program. Read more.