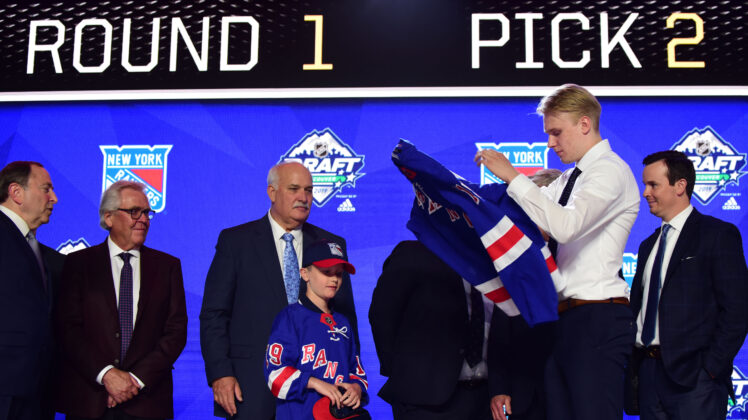 Jun 21, 2019; Vancouver, BC, Canada; Kaapo Kakko puts on a team jersey after being selected as the number two overall pick to the New York Rangers in the first round of the 2019 NHL Draft at Rogers Arena. Mandatory Credit: Anne-Marie Sorvin-USA TODAY Sports

The New York Rangers appear they won’t be overly busy at the upcoming 2022 NHL Draft.

Day One of the Draft is July 7 with Day Two on July 8 at the Bell Centre in Montreal.

The city had been scheduled to host in 2020, but the event was held virtually because of the COVID-19 pandemic instead, as it was in 2021. The New York Rangers proudly selected Alexis Lafrenière with their first ever, first overall selection in the modern draft (2020).

At this present time, GM Chris Drury and his scouting staff will have only four selections through seven rounds this summer. Here’s where the Rangers will be picking:

This can obviously change with any trades the Rangers may make up until or even at the draft. That could include more picks, or even less if rumors are true that it will take a 2nd round pick to unload all of Patrik Nemeth’s contract with 2 years remaining at $2.5M.

When the New York Rangers reached the Eastern Conference Final, Andrew Copp looked over to Drury and apologized for costing him a first-round pick.

“I did come down after [Game 7 versus Carolina] to go around and see the players,” Drury said. “Copper looked up at me and said, ‘Sorry about your first,’ which was no problem at all.”

The deals made at the deadline actually will impact 2023’s Draft almost as much as this one. Here’s a look at those moves:

The condition of Copp’s deal was met with a trip to the ECF and his ability to play at least 50% of those games (he played in all). That’s why the Rangers have no first round selection in this draft.

New York had two second round picks when they acquired one from the St. Louis Blues along with Sammy Blais for Pavel Buchnevich. That pick now belongs to the Winnipeg Jets as agreed to in the Copp trade.

Note: The Jets could still opt to take the Rangers second round pick in 2023 instead per conditions.

Drury does not have a third round selection as it belongs to the Vegas Golden Knights in order to acquire Ryan Reaves.

The Rangers gave up their 4th round pick in a trade for Frank Vatrano but acquired one from Vegas by sending Brett Howden the other way.