For the Blueshirts, it will be their second game of a 4 game homestand. However, they will also be playing host to another reunion night as former head coach David Quinn will be behind the Sharks bench.

“I’d be lying to you if I said no (it’s not special),” Quinn said via NHL.com. “Yeah, it is, I mean, I had three great years in New York. I loved my time there. I loved the players. I don’t care if we beat the Westchester Rangers, I just want to freaking win.”

The Rangers hired David Quinn at the end of the 2017-18 season. That was three months after sending out The Letter that announced the rebuild in February of 2018.

Quinn, 56, was 96-87-25 in 208 regular-season games with the Rangers over the course of three seasons. Two of those seasons were cut short by the pandemic.

In his second season with the team, the Rangers had just signed Artemi Panarin and were slowly coming together as a group. Unfortunately, COVID-19 placed a pause on them and the world.

The Rangers were on a 14-7-1 run and just 2 points out of a wild card spot when play was halted. When the season resumed with a qualifying round, they were swept by the Carolina Hurricanes. Quinn was fired after the 56 game shortened season in 2020-21 along with president John Davidson and gm Jeff Gorton.

“It’ll be good to see him. I’m glad to see him get behind the bench again for sure.” Jacob Trouba said. “That year was tough at times with everything we went through in the world. Definitely a challenging year. He means well and he cares about his players a lot. He’s a good person, nice guy. Everyone in the organization knows how good of a person he is.”

New president and general manager Chris Drury hired veteran bench boss Gerard Gallant soon after letting Quinn go and it was a great move. The 59 year-old led the Rangers to a 52 win campaign and the Eastern Conference Final where they lost to the Tampa Bay Lightning.

Quinn was brought in to help the younger players develop, many critics felt he didn’t do a great job in that department. Mostly pointing a finger at the ice time for top draft picks Kaapo Kakko and Alexis Lafrenière. However, Gallant had a different perspective when asked about Quinn’s impact.

“He did a good job with them,” Gallant said after Tuesday’s practice. “I got them, they weren’t close to being a finished product but they’re improving every year and that’s what you want. It takes time, but last year they made big strides with our team.”

Looking at tonight’s contest, the Rangers have scored 17 goals in winning three of its first four games and has seen Panarin and Mike Zibanejad get off to scorching-hot starts.

Igor Shesterkin is expected to get the start in net. Ryan Carpenter is also making a return to the lineup after missing one game due to a deep laceration on his ear and head. 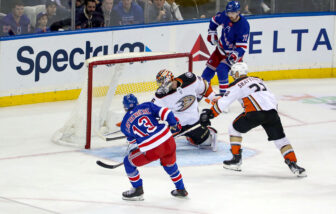 Also Read:
NHL Salary Cap may increase by $4 million, New York Rangers could use every penny

After sitting out last season, Quinn was hired by the Sharks on July 26 in an attempt to revive a team that has missed the postseason in three straight seasons while not finishing with more than 77 points.

After a year away from coaching, Quinn is off to a rough start with his new team. Amid his return to New York with the San Jose Sharks, he’s trying to put an end to an ugly season-opening, five-game losing streak.

So far, the Sharks are being outscored 19-8. In Tuesday’s visit to the New York Islanders, San Jose center Nico Sturm scored the game’s first goal and Evgeny Svechnikov netted the tying goal late in the second before the Sharks suffered their second straight 5-2 loss.

“One thing about this game, it rewards honesty,” Quinn said. “We’re honest at times, but we’re not honest enough. And that’s something we got to learn, and we got to get out of this rut by playing a little bit more honest.” 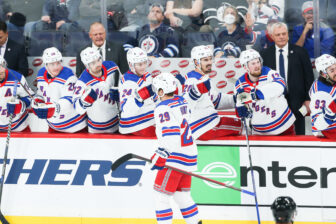