New York Rangers In and Out: Offseason moves for grit and cap space

Chris Drury was pretty clear about what he wanted his Rangers to be heading into next season. “It’s hard not to watch these playoffs and notice the physicality, the energy, the effort and the intensity it takes to win and to succeed and we’re certainly going to need to play that way to have success,” he said back in June.

A look at the moves the Blueshirts have made speak exactly to that. “You know we all want harder players to play against and we’re no different,” Drury words rang prophetic as they added grit players like Barclay Goodrow and Ryan Reaves. However; the moves made also conserved valuable cap space as well.

New York Rangers players in and out

The Blueshirts moves consisted of six players being brought in that currently are counting against the cap on CapFriendly. Gregg McKegg is currently slotted in the AHL so he is not counted. They are also one player over the 23 man roster limit, so the savings will likely go up another $762,500 once Dryden Hunt is sent down.

For simplicity’s sake, the Rangers have gained at least $3.2 million in cap space with their moves. In actuality it’s more since Pavel Buchnevich received $5.8 million with the Blues. That difference comes out to potentially $5.78M which went to signing goalie Igor Shesterkin for $5.66M.

The Rangers currently have $8.8M in cap space, but will have around $9.5M when the roster is trimmed to 23. They need to account for performance bonuses so the number is closer to $7.5M.

This gives Drury plenty of flexibility to make more moves, but to also start preparing to give extensions to Mika Zibanejad and Adam Fox.

Chris Drury made the Blueshirts harder to play against

By acquiring the 28 year-old Goodrow the Drury began to reshape his bottom six. The 6-2 forward skated in 55 games with Tampa Bay last season, picking up six goals and 20 points, along with a plus-16 rating and 52 penalty minutes. He also notched six points in 18 playoff games while helping the Lightning win the Stanley Cup for a second straight time.

The signing of Patrik Nemeth is to stabilize the Rangers third pair defense. He is expected to be paired with top prospect Nils Lundkvist, and will help mentor him. Jarred Tinordi will be slotted in for the rough and tumble games with team’s like the Islanders and Capitals.

Shesterkin’s deal, while slightly high for a goalie with less than a full season under his belt is going to be worth it in the long run. 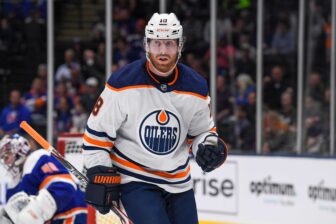 Are the Ducks back in on Eichel? Read more.