“I’m excited to formally introduce and welcome Gerard Gallant to the New York Rangers,” Drury began. “At the start of this process, I was looking for a coach with a proven track record and success at several levels. Turk (Gallant) checked all of those boxes.”

Over the course of 20 minutes, both Gallant and Drury answered a myriad of questions. Getting past the usual questions, there were several key takeaway that may provide insight to future moves.

Chris Drury on naming a captain: “We can keep moving this thing forward, a big piece of that for me would be getting a captain. For me it’s a priority. At the end of the day, it has to be the right person. I’m not interested in giving it to someone to just say we have a captain. I think we have a lot of leaders in our room and leaders that have taken big steps, including the second half of last season.”

Takeaway: There’s always a possibility that the Blueshirts could trade or sign a player to be captain. However, I think you need to look to the obvious three players often talked about for the role. Mika Zibanejad, Chris Kreider, and Jacob Trouba are your leading candidates.

Drury also indicated that he and Gallant will continue discussions on the topic heading into camp. 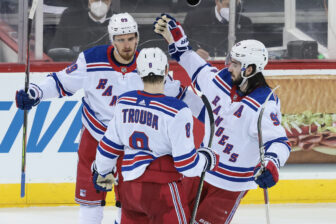 Gerard Gallant wants to play a 200′ game with defined roles

Gerard Gallant on style of play: “When I was in Vegas, and I hate talking about the past, we went to training camp with a plan, put our systems in place and we expected everybody to play a 200-foot game. Everybody has to have a role on your hockey team, and that’s what’s important to me. It’s not going to take 15 guys to win, it’s going to take 23 guys on the roster to win games every night. Like I said, I try to make every player important to our hockey team, everybody has a role to play and that’s what we expect. Do your role, play your role well and we’ll win hockey games. I want to be the hardest-working team in the league – to work hard, to battle hard, to make other teams say, ‘That team works hard every night.’”

Takeaway: There is a lot to unpack there, and most of it is high level. To be fair, every coach wants their team to be the “hardest-working team in the league”. That’s a basic coaching platitude. What was the most interesting tidbit was Gallant’s comment about roles. This harkens back to what Chris Drury said when he took the job late in the season. “We’ve got to get to a place where when you jump over the boards you know what your role is,” he said on an MSG interview. Defining roles is easy, filling them is another.

Chris Drury has work to do with the roster

Chris Drury on Rangers roster: “It’s hard not to watch these playoffs and notice the physicality, the energy, the effort and the intensity it takes to win and to succeed and we’re certainly going to need to play that way to have success in the regular season and in the playoffs. We’re always looking at ways to improve the lineup, to add different pieces, just like every team in the league, and every team in the league is watching these playoffs – you know we all want harder players to play against and we’re no different.”

Takeaway: Undoubtedly the biggest indication as to what the Rangers may do this off season stems from Gallant’s role response and Drury’s admission the lineup needs to be tougher to play against. We’ve been discussing for months the need to bring in more grit and toughness to the bottom six of this lineup. Your first two lines are traditionally where you get the majority of your offense from. A third line should be able to shut down top lines and chip in offensively. Your fourth line needs to be your energy line that brings the heat while your other three lines earn a rest.

It’s a simple formula really, but the Rangers just don’t have the players to fill out the bottom six. This certainly will drive the analytics crowd crazy since many firmly believe there’s little to no value in those type of players unless they can “possess the puck” and “drive offense”. Bottom line, Vitali Kravtsov isn’t a third or fourth line role player. Roster changes are coming. 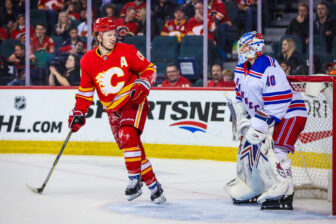 Also Read:
NHL Rumors: Matthew Tkachuk wants out of Calgary; is he a fit for the New York Rangers