NHL Rumors: Matthew Tkachuk wants out of Calgary; is he a fit for the New York Rangers

Calgary Flames forward Matthew Tkachuk is rumored to want out of Calgary. It wasn’t much, but the moment Sportnet’s Shane O’Brien dropped the bombshell to Steve Kouleas, the hockey world has since been buzzing. According to O’Brien, he heard that Matthew Tkachuk wants out of Calgary and would like a trade to the St. Louis Blues. The same city his dad, Keith Thachuk ended his career with.

Matthew Tkachuk was upset with Flames this past season

Matthew Tkachuk only knows how to play the game one way, but apparently some of his teammates weren’t thrilled with his nightly antics. Elliotte Friedman on a 31 Thoughts Podcast got into what happened after the Jake Muzzin puck-flip incident which caused a major scrum.

“I think Tkachuk was really frustrated by what happened. That whole puck flipping thing led to a meeting that I think just sent them sideways,” Friedman said. “I think Tkachuk feels that some of the players didn’t want him to create something every game and I think he’s confused by that. I think he understands only how to play the game a certain way and I think he’s questioning it now.“

At the time, I dismissed it as a heat-of-the-moment incident. Apparently, there was more than meets the eye to the story with this recent trade news. 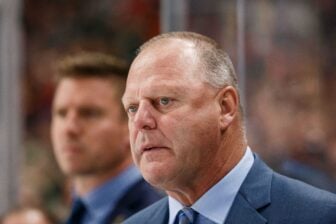 The Rangers need a gritty and in-your-face player like Tkachuk who can also score. The issue is he’s a top six winger and whether you play him on the left or right wing he’s bumping out either LW Alexis Lafrenière, RW Pavel Buchnevich, or RW Kaapo Kakko.

Let’s not forget, Artemi Panarin is cemented at #1 LW and Kreider has a no move clause. Trading #20 wouldn’t be an easy salary to shed anyway. Also, what do you think it would take to get Tkachuk? Are you trading Kaapo Kakko and more to get him? That still means a log jam on left wing. Someone, either Lafrenière or Tkachuk will have to move to the right in order for this to work.

Trading Kakko isn’t a must to get Tkachuk here. The Rangers could move Pavel Buchnevich and Vitali Kravtsov to make it happen. That would take away the depth at wing, but Drury could fill that in free agency.

Just to wrap this up in a neat bow, Tkachuk would be a fit for the Rangers with a little bit of work. The big issue here is the Flames don’t have to trade him and I haven’t heard they want to at this point. He has a year left and they own his rights, so right now Tkachuk is more of a fantasy than a legit trade target.

Also Read:
Are John Davidson and the Blue Jackets going to take Jack Eichel away from the Rangers?

Mathew Barzal only fined for cross check to player’s face

Were you expecting a suspension? In the playoffs? Read more.