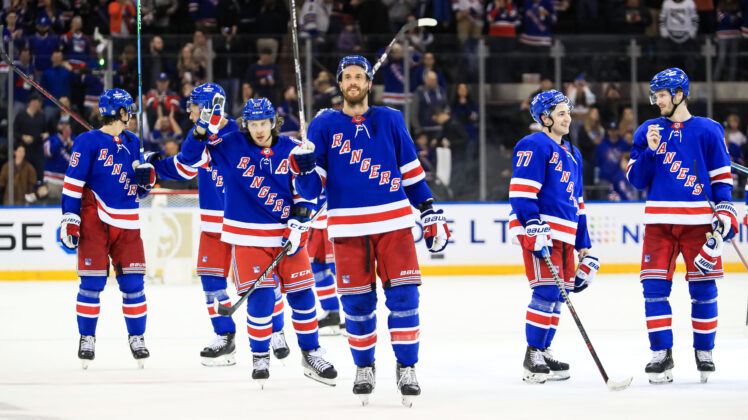 The New York Rangers are in a prime position to clinch first-place in the Metropolitan Division with just six games remaining.

Entering tomorrow’s matchup against the Winnipeg Jets at Madison Square Garden, they could be looking to tie the Hurricanes or possibly claim sole ownership of the top spot.

Carolina is in Arizona to take on the hapless Coyotes at 10 PM ET. They will do so without captain Jordan Staal, who is day-to-day. In addition Jesperi Kotkaniemi is also day-to-day and goalie Frederik Anderson will be reevaluated next week.

For most of their ascent toward the top of the Metropolitan Division, the New York Rangers produced enough offense to move them forward. Recently, their defense appears to be catching up.

Coming off consecutive shutouts, the Rangers will attempt to continue their defensive ways Tuesday when they host the fading Winnipeg Jets.

New York (49-21-6, 104 points) heads into Tuesday with a shutout streak of 120 minutes, six seconds after following up Wednesday’s 4-0 blanking at Philadelphia with Saturday afternoon’s 4-0 win over the visiting Detroit Red Wings.

Those two wins gave the Rangers points in 10 of their past 12 games (9-2-1), a stretch in which they have allowed one goal or fewer six times. Their recent performances have pulled them even with the Hurricanes for points in the division, but their 41 regulation wins are one fewer than Carolina entering play Monday.

On Saturday, Igor Shesterkin made 20 saves. It marked the fourth straight game and the 11th time in 12 games that the Rangers conceded fewer than 30 shots.

New York’s strong defensive effort resulted in its offense getting 37 shots on goal and two goals from Alexis Lafreniere. It was the Rangers’ fourth straight game with at least 30 shots and the ninth instance in the past 13 games.

“It’s a high-powering offensive team and we can play defense, too, when we need to. Defense wins hockey games,” New York forward Frank Vatrano said. “Doesn’t matter how many goals you score — obviously it’s great to score goals — but coming down the stretch here coming into the playoffs, it’s about keeping the puck out of your net and playing a good team defensive game.”

Kaapo Kakko expected back for playoffs

Kaapo Kakko, 21, suffered the injury in the first period on Saturday against the Detroit Red Wings. He was skating along the left wall while tied up with Tyler Bertuzzi when he fell. His right leg went underneath him as he crashed into the boards.

After practice the head coach was asked if Kakko being out week-to-week meant that he could be out for awhile.

“Definitely not,” Gallant noted. “I fully, fully expect him to be ready for the playoffs. Again things can change but I’d be shocked.

“Hopefully he will play 2 or 3 of the last games but we expect him for playoffs.”

Kakko has already missed 35 games this season after two other stints on IR. He has recorded 7 goals and 16 points in 40 games. 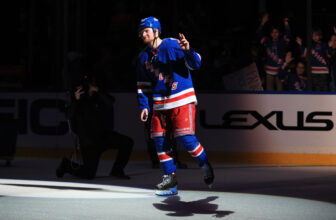 Jets on the brink of elimination

Winnipeg (35-30-11, 81 points) is 10 points behind the Nashville Predators for the second wild-card spot in the West but is also trailing the Vegas Golden Knights (87 points) and Vancouver Canucks (84 points).

The Jets, who last missed the playoffs in the 2016-17 season, are on a 2-5-1 slide since winning 11 of 16 (11-4-1) from Feb. 27 to March 30. During the slide, Winnipeg owns losses to the Toronto Maple Leafs, Colorado Avalanche, Florida Panthers and Tampa Bay Lightning and has allowed 25 goals in those games.

Winnipeg heads to New York after a lost back-to-back set at Florida and Tampa Bay.

After enduring a 6-1 loss to the Panthers on Friday, things did not go much better Saturday in a 7-4 loss. The Jets held a 4-2 lead before allowing five goals in the final 26:04 in a game where they were outshot 37-18 after allowing 43 shots to the Panthers.

The Rangers have won the past three meetings and scored 14 goals in those games. Chris Kreider scored twice in New York’s 4-1 win in Winnipeg on March 6.