The New York Rangers have placed forward Julien Gauthier and defenseman Jarred Tinordi on waivers for assignment to the Hartford Wolf Pack.

Oddly enough, the Blueshirts did not place Dryden Hunt on waivers or Vitali Kravtsov indicating that a final decision has yet to be made that would also involve Jimmy Vesey, who is on a PTO.

If Vesey is released and no standard contract offered, that would allow the Rangers to keep both Kravtsov and Hunt on the roster. Should Vesey be offered a contract, that could mean a trade is in the works that will have either Hunt or Kravtsov on the move.

On defense, Libor Hajek was not placed on waivers which would indicate he’s won the job as the 7th defenseman. Matt Bartkowski will likely be released from his PTO.

Gauthier, 24, scored 3 goals and 7 points in 49 games with the Blueshirts in 2021-22. He was acquired from the Carolina Hurricanes back on February 18, 2020 for defenseman Joey Keane. At that time, the former first-round pick had played only 5 NHL games with one assist.

This summer, the Rangers signed him to a 1-year, one-way deal worth $800,000 per CapFriendly. The deal came amid rumors that Gauthier had requested a trade from the Rangers per The Athletic.

Tinordi, 30, is entering the final year of a 2-year deal he signed with the Rangers last summer. He played only 7 games with the big club in 2021-22 picking up a goal, 7 penalty minutes, and a -5 rating.

The big defenseman is expected to clear waivers. Gauthier will be an interesting watch on the wire tomorrow. It’s been rumored that Seattle Kraken GM Ron Francis has interest in Gauthier, whom he drafted while with the Carolina Hurricanes. 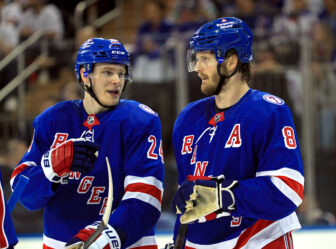