The New York Rangers and Kaapo Kakko have come to terms on a two-year contract extension. Financial terms of the deal were not disclosed by the team on Thursday.

Per the NY Post’s Larry Brooks, the AAV on Kakko’s new deal is $2.1 million.

Kakko, 21, played in just 43 games last season due to three stints on the injured list. He managed to record 18 points during the regular season with another 5 points in 19 postseason contests.

“We think the world of him, he’s a terrific young player. We want him here for a really long time,” Chris Drury said on July 13. “It’s a player we want and I’m not too worried about getting him into the fold soon.”

While it took a little over two weeks to complete, it did indeed got done as many expected.

The Rangers selected the native of Turku, Finland second overall in the 2019 NHL Draft.

Since then, he’s accumulated 26 goals and 58 points in 157 career games in the league. Per the team’s press release, Kakko’s career point totals have him tied for fourth most all-time among Blueshirts who were 20 or younger as of January 31, 2022.

As the team opted to let unrestricted free agents like Andrew Copp and Frank Vatrano walk, he will be given a legit chance as either the first or second line right wing.

When this deal expires in the summer of 2024, New York will be in a much better position camp wise to sign Kakko long-term. Both Chris Kreider ($6.5M) and Jacob Trouba ($8M) will see their full no-move clauses become modified no-trades. This will allow the Rangers the ability to trade either of them for cap space. 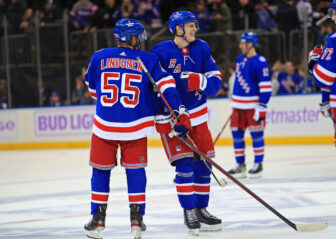