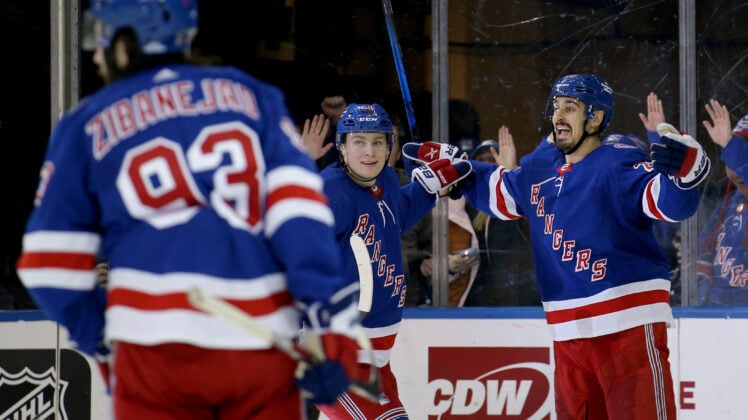 The New York Rangers are about to be overloaded with choices to fill out their four lines in the near future. These are considered good problems for an NHL team to contend with, but a problem nonetheless.

While Kaapo Kakko and Kevin Rooney continue to skate on their own, they are close to a return. When they do, the New York Rangers will need to decide which 12 healthy forwards should be in the lineup out of 17 possible options.

Some of the potential scratches are obvious, but others will not be an easy decision. That includes what line a player like Kakko should play on. Same for Barclay Goodrow, who may be regulated to fourth line duties once everyone is ready to go.

Kakko has missed 34 games since a lingering issue landed him on IR on January 22. Meanwhile, Rooney has been out of action since suffering an upper-body injury on March 2.

“They’re skating and they’re real close,” Gerard Gallant said this week. “The doctor’s control that– not me. I was hoping to have them back two weeks ago. We’ll be patient and make sure they’re ready.”

However, once they return a serious logjam will need to be dealt with.

After the deadline acquisitions of forwards Andrew Copp, Frank Vatrano, and Tyler Motte the Rangers are overloaded up front.

Needless to say, that change was a no-brainer and has worked beautifully. Vatrano has looked like a perfect fit with his speed and shoot-first mentality on the top line. Copp has also been a great compliment for Panarin and Strome.

So what will Gallant do when he has Kakko and Rooney healthy?

Clearing up the logjam won’t be easy

“Obviously some guys are gonna be disappointed, they’re not playing as much, that’s all part of it,” Gallant said via the NY Post after the deadline. “It’s about attitude. Take the right attitude, do what you can do. If you’re not playing, go work hard and be ready for when you do play. It’s not easy, but we’re all trying to win.”

The additions have already bumped players like Ryan Reaves out of the lineup, and things will only get harder for him to get back in once Kakko and Rooney return from IR.

“You don’t want to be around the guys that bring any negative energy to the locker room,” Reaves said after a recent scratch. “I’m getting older, and with all the guys we’ve got in here there are probably some games I’m not going to play. Am I happy about it? No, you never want to sit but you can’t be a distraction in the locker room. You have to be the same guy and bring energy.”

Here’s a look at the expected forward lines when everyone is healthy:

Gallant will be hard pressed to find playing time for Ryan Reaves, a player he loves and lobbied hard for the team to acquire. Greg McKegg will likely stick around as should Dryden Hunt. Both seem like they are behind Reaves on the current depth chart.

As for Julien Gauthier and Jonny Brodzinski, it would make sense to get them down to Hartford to help the Wolf Pack chase down the Calder Cup. 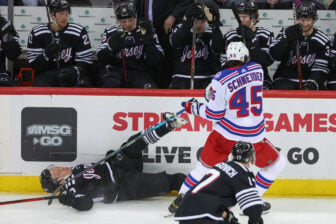 Recap all 10 games on the NHL schedule for Tuesday at The Daily Goal Horn! A new home for schedule, scores, and rumors. Read more.