The New York Rangers saw their long winning streak end with a thud Wednesday. On Friday, they have a chance to show they have a short memory.

The Rangers get their first chance to recover from one of their worst performances of the season Friday night when they visit the skidding Buffalo Sabres.

Putting the loss to the Avs behind them

New York, which is 11-2-0 in its past 13 games, saw a seven-game winning streak come to an end after allowing five goals in the second period of a 7-3 home loss to the high-scoring Colorado Avalanche.

The disastrous period was the centerpiece of New York’s worst showing since a 6-0 road loss to the Calgary Flames on Nov. 6.

“We opened the door for them,” Rangers coach Gerard Gallant said. “We turned some pucks over. They are a dangerous team. The game’s over, you move on. You get ready for the next game in Buffalo.”

The Rangers have not sustained consecutive losses since dropping three straight games at Vancouver, Edmonton and Calgary from Nov. 2-6. New York also has followed its blowout losses with impressive wins.

“We had a lot of good games in a row – you lose one, not going to dwell on it,” Jacob Trouba said. “We’re in a heavy stretch of hockey until Christmas. You’ve got to move on quick and worry about the next game.”

The Rangers followed a 5-1 home loss to Calgary on Oct. 25 with a 4-0 blanking of the Columbus Blue Jackets four nights later, then knocked off the Florida Panthers two nights after the six-goal loss in Calgary.

“We knew it was going to be a good test for us coming into it,” Barclay Goodrow said. “I mean, the one good thing is, with so many games coming up, we can put it in the rearview mirror pretty quickly and we see them again next week.”

Rangers get a struggling Sabres team

The Rangers played their most dramatic game of the season against Buffalo on Nov. 21, when defenseman Ryan Lindgren scored the tie-breaking goal with one second left in regulation to give New York a 5-4 win. That started the Rangers’ seven-game winning streak that featured three one-goal victories.

Buffalo is on its second five-game losing skid of the season, going 0-4-1. The Sabres are 1-6-1 in their past eight games since the last meeting against the Rangers.

The Sabres are also getting outscored 25-12 during the five-game losing skid that has seen them allow at least six goals three different times.

The skid continued with a 2-0 loss to the Anaheim Ducks on Tuesday when the Sabres totaled 15 of their 25 shots in the third period. It marked the ninth time this season Buffalo was held to 25 shots or fewer.

“We looked a little lethargic,” Buffalo coach Don Granato said. “You can only guess why and we’re going to try to figure that out ourselves on the coaching side, because we didn’t look like ourselves and didn’t play with the pace that we typically do.”

Besides the disappointing offensive performance, the Sabres also lost Casey Mittelstadt in the third period to an upper-body injury. Mittelstadt was placed on injured reserve Thursday and was slated to see a specialist.

“We’ve been on a good run,” Gallant noted. “We’ll bury it and go on to the next one. I’m not worried about it one bit. I’m not happy about losing, but we move on to Buffalo.” 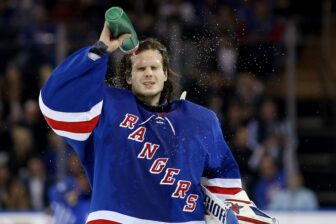