Mika Zibanejad is due for a big pay raise. It’s one he’s earned and deserves. As important as Artemi Panarin is to the future success of the Rangers, Zibanejad could be even more so for different reasons.

The Blueshirts are one of the youngest teams in the NHL and they boast some of the best young talent in the game. Exactly how Chris Drury manages the cap will be just as vital as the talent on the roster itself. Which could be the difference between multiple Stanley Cups or being also rans. That’s why Mika’s next contract is so paramount.

A recent report from Larry Brooks says that the Rangers and Mika Zibanejad have begun talks on a new extension.

We can report that there have been preliminary discussions between Drury and Zibanejad’s agent, Monir Kalgoum, who happens to be the center’s brother. Our best information at this point is that Zibanejad is seeking a deal that would be at least commensurate with the one under which Eichel is operating in Buffalo. That would entail a commitment of $10 million per year.

There’s little question that Chris Drury would like to retain Zibanejad. “Mika is a huge part of our team. I’m not going to discuss his contract or anyone else’s publicly,” Drury said recently. “I have a ton of respect for him as a person and a player.”

Cup winning Lightning model is the way to go

You don’t have to look far as to why centers are critical to winning championships. The Tampa Bay Lightning are built from the middle on out with Steven Stamkos, Brayden Point, and Anthony Cirelli. That’s why there’s a desire within the Rangers organization to add another top pivot like Jack Eichel.

Stamkos earns $8.5 million per season, on an 8 year deal he signed in 2016 when he was 27 years-old. It was a hometown discount considering the AAV was slightly less than Sidney’s Crosby’s deal that was signed in 2013. They also got Nikita Kucherov to take a discount in 2019 when he inked an 8 year deal with an AAV of $9.5 million and that was after a 128 point season. Remember, that’s the same summer the Rangers signed Artemi Panarin for 7 years at $11.6 million.

They did the same thing with Victor Hedman when his deal was up. Another 8 year deal with a sweetheart $7.875 million price tag. Andrei Vasilevskiy was no different when he inked his 8 year contract last season for $9.5 million after winning a Cup.

It’s signings like these that have helped the Lightning. Keeping superstars for a little bit less than what they can get on the open market. It’s allowed them to trade for necessary pieces like Ryan McDonagh and David Savard en route to two Stanley Cups.

Mika Zibanejad next contract is crucial

The Rangers top center Mika Zibanejad has only next year left on his contract. He currently earns $5.35 million and is due for an increase. In the last two seasons he has scored 65 goals and 125 points in 113 games. That’s worth big time money, and if he hits the open market next summer he should get 7 years at $10 million per season. That’s regardless of the current flat cap situation expected to stay at $81.5 million for the next few seasons.

Chris Drury needs to start following the Lightning model and give the 28 year-old pivot an 8 year deal despite the fact that it will take him to 37 years of age. Matter of fact, that’s exactly what he should do with Adam Fox, and Alexis Lafrenière when the time comes. If Kaapo Kakko has a breakout season in 2021-22, he should consider giving him 8 years too.

Mika Zibanejad has openly said he loves playing for the Rangers. There’s mutual interest as has been reported from multiple outlets. If Drury can get Zibanejad to sign a contract for 8 years at around $8 million per season, it would be a huge win for the team’s future.

However; if Zibanejad is adamant about getting what he’s owed then the Rangers have to be smart about it. The Rangers top center will command a no-move clause as well, this is where Drury has to draw a line. It CAN’T be a full no move for the duration of the deal. Any deal in the 7 to 8 year range must have a modified NTC starting in year four when Zibanejad nears that age where production starts to diminish.

Let’s make this clear, Mika does not have to give a hometown discount. If he did, then the Rangers concession should be a full no-move clause, or at least make it modified in years 6 through 8.

The Rangers have a bright future ahead. That can be easily destroyed if Chris Drury isn’t managing the cap for that same duration. 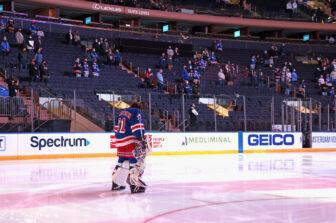