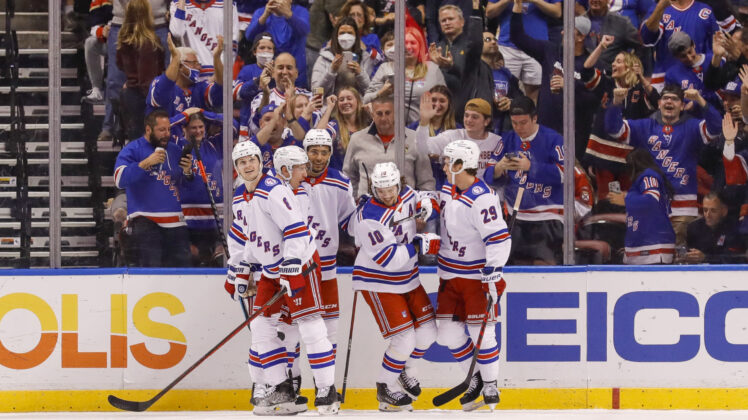 The New York Rangers are coming off a tough after taking their first regulation loss of the season after blowing a third period lead to the Florida Panthers. They will get to know the Tampa Bay Lightning well over the next three days, starting with their first meeting in Tampa on New Year’s Eve.

After Friday’s bayside tilt, the Rangers and Lightning will head to New York for Sunday’s match to round out the home-and-home set.

It’s a team that just got their dairy aires handed to them 9-3 by the Florida Panthers thanks to a COVID depleted lineup.

Rangers coach Gerard Gallant would like to see more consistency from his team after it let a pair of one-goal leads slip away in a 4-3 road loss to the Florida Panthers on Wednesday.

Through two periods, the Rangers were the better of the two Eastern Conference powers — good enough for a 2-1 lead after Artemi Panarin and Mika Zibanejad found the net.

However, the Panthers tallied three times in a span of 8:44 in the third period to take a two-goal advantage, and they held on for a 4-3 victory.

The loss was the Rangers’ fourth in their past five outings (1-3-1), but Gallant found positives in his team’s first game since Dec. 17.

“I was real happy with the first two periods, obviously,” the first-year Rangers coach said. “I thought it was a good game. Both teams were back and forth, good goaltending, solid play from both teams.

“In the third, we got away from it, made a couple of mistakes that ended up in the back of our net.”

With 45 seconds left in regulation, New York’s Chris Kreider scored his team-leading 19th goal — in just 31 games — but the Panthers shut down any more scoring chances.

“You’re not going to find a team that doesn’t blow a third period lead through the course of the year,”  Jacob Trouba said. “We played a good game for the most part– correct some mistakes we made in the third period and we will be fine.”

It wasn’t too long ago when Rangers forward Barclay Goodrow was sacrificing his body to help the Tampa Bay Lightning win back-to-back Stanley Cups.

“It’s cool being back here,” Goodrow said after practice today in Tampa. “Last time on that ice, we were lifting the Cup. I’m excited to be back and looking forward to tomorrow night.”

Now the gritty forward has to help his new team take down his old one.

“I obviously know the systems and how they play,” Goodrow said. “In the end it comes down to our game. If we’re playing the way we’re capable of and not cheating things– When we have all four lines for 60 (minutes) we’re pretty hard to play against.”

The Rangers are going to need his help too. Tampa is once again one of the best teams in the league and despite having COVID issues will be hard to beat.

“[Tampa] is in first place in the NHL again. Jon Cooper and his staff do a good job getting this team ready to play,” coach Gerard Gallant said. “They play hard. They work hard and that’s why they win Stanley Cups. It’s not just from their skill but their will and how they play every night.”

The Rangers also really need a win after blowing a third period lead to the Panthers on Tuesday. They are just 2-4-1 in their last seven. 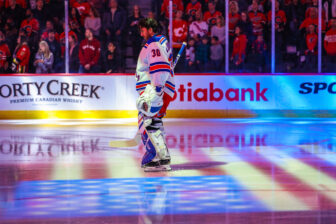 The Rangers will be catching Tampa Bay on the second game of a back-to-back scenario after the defending Stanley Cup champions were blown out 9-3 by the Panthers on Thursday.

The last time the teams met, the final score was also 9-3 — a Lightning victory on Nov. 14, 2019, in which Tampa Bay tied the franchise record for goals in a game.

Lightning forward Brayden Point notched just a single assist in that rout, but the Calgary native made his presence known immediately this week in his return to the lineup following a 14-game absence.

“The game doesn’t change, but some of the timing was off,” Point said. “I was a little bit off in the early parts of the game but felt better as it went on.”

The Panthers also snapped Tampa Bay’s four-game winning streak and handed the Lightning just their second loss in their past 11 games.

With Tampa Bay’s top two goalies, Andrei Vasilevskiy and Brian Elliott, sidelined due to COVID protocol, third-stringer Maxime Lagace was torched for six goals on 27 shots in two periods Thursday. Hugo Alnefelt, 20, made his NHL debut by playing the third period, and he surrendered three goals on 10 shots.

Lightning coach Jon Cooper, back after a nine-day, COVID-prompted absence, said of the blowout defeat, “We gave up too many chances to a really good team that wanted to beat us and a team that we’ve handled and beaten in the playoffs, and they haven’t forgotten, and after (Thursday), I won’t forget this.

“But they deserved what they had, and we probably helped them along in the process. But don’t look at our lineup and say that’s a victim of circumstances. We put ourselves in that position.”