Rangers Roundup: Drury trying hard to make a trade, and should Lundqvist Night be postponed?

The New York Rangers have hit a bit of rut on their road to postseason action. In their last seven games they are just 2-4-1 and raising some red flags against the NHL’s better opponents.

For the entire season, one area that the Rangers have struggled with is rightwing after trading Pavel Buchnevich for future cap savings. They did get back Sammy Blais, who seemed like a perfect third line winger that could move into the top six from time to time.

Unfortunately, Blais was lost to a season ending ACL tear and the Rangers need to give up on hoping Dryden Hunt can play a top six role. The hard-working forward has three goals on the year and none in the team’s last 10 games despite playing with Ryan Strome and Artemi Panarin. He is best suited for a 4th line energy role.

Rangers have been trying to make a trade

The reality is that with COVID issues and so many teams being in the hunt, it is hard to make a deal.

Regarding targets, most are rentals with many names being bandied about. Tomas Hertl is who many fans would like to see. Lately there’s been some noise around Claude Giroux but the most realistic option is Reilly Smith in Vegas.

Smith, 30, has 11 goals and 26 points in 33 games. He will be a UFA this summer with a current cap hit of $5M. The winger played with Gallant in Vegas and should be available late next month or early February once Jack Eichel comes LTIR. 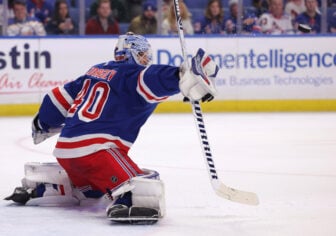 The New York Rangers are set to honor Henrik Lundqvist in a jersey retirement ceremony next month.

Madison Square Garden is the place and Friday, January 28, 2022 is the date but with a spike in COVID cases it has Larry Brooks wondering if the ceremony should be postponed.

Should the organization go full steam ahead if the ceremony needs to be pared down to conform with COVID-related protocols? Is that fair to Lundqvist? Plus, does it make any sense to keep this night on the schedule when there is always the chance that the game could be postponed just hours in advance of the contest by the league if either the Rangers or Wild experience an outbreak? Answers are no, no, no, no … and no.

The nightmare that this would cause considering the exorbitant amount of money some people paid for tickets on the secondary market makes the idea ludicrous.

Although, a potential postponement is not out of the question, it would be for the game and not just the ceremony. Let’s just hope for everyone’s sake the night goes off without a hitch. 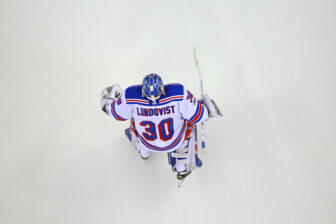