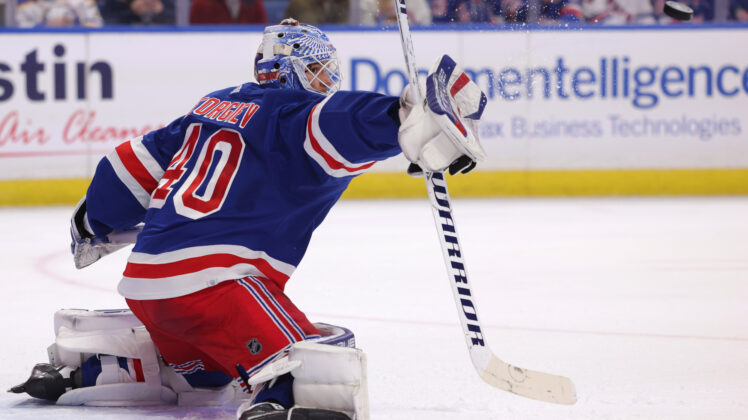 Alexandar Georgiev was playing some of his best hockey before the extended holiday break. Unfortunately, his time-off will last just a bit longer after being placed on COVID-19 protocol this past Sunday.

The 25 year-old goalie is a pending RFA and due to the Rangers cap concerns beginning next season, he’s likely moving on. Even a minimum qualifying offer of his current salary ($2.425M) is too much. Plus, he’s been rumored to be asking for a chance at being a team’s number one for awhile.

Alexandar Georgiev’s true value is as a starter

Before Igor Shesterkin went down with an injury on December 3rd, Georgiev was struggling as a spot backup. His record was fine at 3-1-1, but a 3.58 GAA and a .876 SV% was extremely concerning.

The Shesterkin injury really presented a prime opportunity to raise his value around the league.

It’s been well documented that he’s been on the block and hasn’t received much interest. Although he’s denied it, Georgiev has been looking to get out for quite awhile.

“We’re told that Georgiev has wanted out since the 2020 bubble, when he thought his work at the club’s pre-tournament summer camp had earned him the starting assignment for the qualifying-round series against Carolina,” Larry Brooks wrote for POST Sports+ (Subscription Required).

Once Georgiev assumed the role as the Blueshirts’ #1, he got on a roll. During Shesterkin’s stint on IR, the quiet goalie posted a solid 3-2-1 record. What was really impressive was his .931 SV% and 2.00 GAA. Proving that if given an opportunity to play regularly, he can be a team’s go-to guy in goal.

One thing that seems clear at the moment is Chris Drury is in no rush to trade Georgiev. There were reports this summer that he was asking for a first-round pick. Obviously no team was biting, but that gives an indication of how Drury sees his trade value.

While it’s unlikely that Georgiev alone will garner such a return, given the right team, they could get a second rounder in the upcoming draft.

Over in Detroit, Steve Yzerman has a young and exciting young team with a 35 year-old Thomas Greiss in goal. He also has two second round picks. Maybe a pairing of Georgiev and Alex Nedeljkovic would be of interest moving forward.

Another team to consider would be the Arizona Coyotes, who have three second round selections. The other squad to look at as a trade partner for Georgiev are the Ottawa Senators. They have two second round picks of their own.

Since the Rangers are contenders with a high probability of making the playoffs, look for this to be an offseason move. Drury has wisely been patient with Georgiev and understands his max return will come from a team that sees him as a starter.