Igor Shesterkin last played in a game on December 3rd. It was a 1-0 New York Rangers victory over the San Jose Sharks. In that contest, the 25 year-old netminder was removed from the game 5:08 into the third period with a non-contact injury to his lower-body, eerily similar to the one he suffered last season as well.

Alexandar Georgiev stopped all 9 shots he saw in relief to complete the franchise’s second combined shutout in history. Henrik Lundqvist and Antti Raanta worked the feat against the Dallas Stars on December 15, 2016.

On Monday, Shesterkin spoke with the media and admitted that it was probably the same groin injury he suffered last season. He was frustrated with himself because he felt he did enough stretching during the offseason to avoid it happening again.

“No. I think just I need to stretch more maybe because I’m not young right now,” Shesterkin said via NY Post. “I don’t know how [to say it in] English, but usually in Russia, we [say], if you’ve got something, it means it should happen and you need to be stronger.”

Shesterkin is set to face the Panthers on Wednesday night in Florida. He admitted that he’s likely going to feel a little nervous after a long layoff due to injury but expects it will only take a few shots to shake that off. 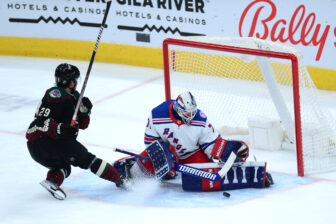 With the Rangers having two defensemen on COVID protocol in Ryan Lindgren and Jarred Tinordi, it’s expected they will call up someone from the Wolf Pack.

Yesterday, the Rangers AHL affiliate signed defenseman Brandon Fortunato to a PTO. The next move will likely be either Zac Jones or Anthony Bitetto to the NHL roster.

While fans would love Zac Jones, a healthy Libor Hajek is ready to take Ryan Lindgren’s place alongside Adam Fox.

“He’s played steady, he moves the puck well,” Gallant said about Hajek. “Now that he’s got in– he’s played solid hockey. He’s going to get another opportunity to play big minutes.”

Anthony Bitetto makes the most sense to act as the 7th defenseman at this time.

The defenseman from Long Island, NY had a nice run with the team last season collecting 4 points in 14 games. He provided a few sparks and was great for the locker-room. His NHL experience also spans 197 games.

This season in Hartford, Bitetto has three goals and no assists in 10 games with a -3 rating. 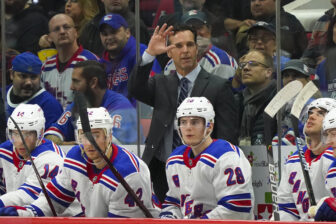