The New York Rangers need to improve in several areas if they want to win Game 4 of their best-of-seven series against the Penguins on Monday night.

Running around in their own end, poor defensive coverages, and missing the net on high scoring chances are just a few of the issues the New York Rangers need to overcome if they want to even the series in Pittsburgh on Monday night (7 p.m., MSG Networks).

Game 3 was a roller coaster ride for the Rangers. A first period that saw the Pens score four goals on 15 shots taking a 4-1 lead into the first intermission was the last thing the Rangers expected.

Alexandar Georgiev leading the team on to the ice for the start of the second period added to the craziness displayed in Pittsburgh. Even a thrilling comeback that eventually saw the game tied 4-4 entering the final stanza was not enough as the Penguins dominated the third period en route to a 7-4 win.

“They took it to us…they came ready to play and we’ll be ready [Monday] night,” Gerard Gallant said on Sunday.

In order for the team to regroup, three areas need to be addressed.

Defense is more about a five-man unit than the two players identified as defensemen. The team has had several blown coverages resulting in shots on goal. How bad has the bad coverage been, just look at the total shots on goal the Penguins have through three games. Pittsburgh has outshot the Rangers 161-144 including 83 shots on goal in Game 1 that the Penguins won 4-3 in 3OT.

The team needs to give Igor Shesterkin more breathing room, more time to watch the game being played on the other side of the ice instead of playing every game with the result heavily weighing on his performance. A familiar issue that Henrik Lundqvist contended with for years.

Poor decisions with the puck and bad plays have led to plenty of shots on goals against. In Game 3, Patrik Nemeth struggled and had two bad turnovers in the third period resulting in the game-winning goal for Pittsburgh. Ryan Lindgren has been missing the last two games due to injury and his return is sorely needed for the team to get back to playing strong defense. He is still listed as day-to-day and a game-time decision.

Gerard Gallant should also keep Justin Braun in the lineup when Lindgren returns and put him with Braden Schneider. Should Lindgren not be ready for Monday’s game Gallant could turn to Zac Jones, but it’s unlikely he would throw another rookie into a playoff series against the vastly experienced Penguins.

Another noticeable issue is with the Rangers’ centers. They haven’t been coming back to help deep in their own zone consistently. With the Pens always having a man in the high slot, the centers have to help the defensemen with coverage. This will aid Shesterkin, who up until Saturday was stopping everything coming his way with the exception of deflected shots down low on him. The centers need to help cover these players. 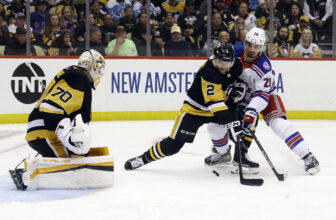 Also Read:
Chris Kreider has seen enough of the Rangers not ‘playing together’

There were some excellent scoring chances for the Rangers on Saturday night. Unfortunately, the team missed the net far too often. Third string goalie Louis Domingue hasn’t been tested nearly enough in my opinion. Although being considered a backup to the back, he has NHL experience and two big wins in this series.

Instead of just shooting pucks from all angles, which they did several times Saturday, they need to play their game in the offensive zone. Drive to the net more, screen the goalie, cycle from the corners to create scoring chances and stop trying to make it as an ESPN highlight goal.

The same can be said for the power play which was 0-3 in Game 3. They need to get more shots on net and battle for rebounds. The Rangers top PP unit seems to alway look to make a cross-ice pass for a shot into a wide-open net. What they should do is get the puck down low and let Chris Kreider, who led the NHL with 26 goals on the man advantage go to work.

It’s vital they get back to what got them into the playoffs in the first place.

More of the Kids Line

Filip Chytil, Alexis Lafrenière and Kaapo Kakko have played an important role in these playoffs.

The Kids Line has played with no fear. They play hard in the offensive end, backcheck all the way into the defensive zone and have kept the mistakes to a minimum.

The three have combined for16 shots on goal with one goal (Kakko) and two assist for three points. Actually, Kakko has two goals but let’s not get into the disallowed goal that should’ve counted.

They have been averaging around 15 minutes per game but Gallant needs to get them a little more ice time. After three games, they’ve proven the ability to generate offensive chances and put some sustained pressure in the Penguins zone.

Shesterkin will be between the pipes on Monday night and is expected to have a huge bounce back game. But he can’t do it alone. It’s time for others to step up, for other players to play above their expectations.

The playoffs are a marathon, but a loss on Monday would allow the Penguins to see the finish line. New York needs to get back to playing the caliber of hockey they’ve played all season. It’s imperative to avoid going down 3 games to 1 in this series. 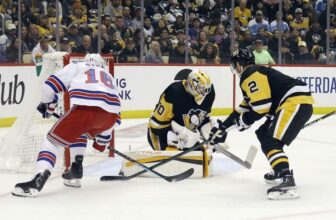 Also Read:
Rangers roar back only to blow it to the Penguins late

The Bruins have roared back from a 2-0 hole to even their series. Plus the Kings, Blues, and Lightning all picked up big Game 4 wins to square things up. Read More.