Chris Kreider has seen enough of the Rangers not ‘playing together’

The New York Rangers resiliency was tested in Game 3 and will need to be a major factor in Game 4 on Monday, as they look to avoid going down 3-1 in this series.

On Saturday night, the Penguins jumped on Igor Shesterkin and the Rangers early. By the time the first period was over, Pittsburgh staked a 4-1 lead in the game and chased Shesterkin from the net.

In the second period, the Rangers played their best 20 minutes of the entire series. Shift after shift. Wave after wave. They were relentless in all three zones and dominated the middle frame to erase the deficit.

They entered the third period all tied up, but simply changed the way they played in the final stanza. Despite getting three consecutive power plays from the late second period and early into the third, they could not convert.

Finally, another abysmal turnover from Patrik Nemeth, who easily had his worst game of the playoffs finishing with a flattering -3 rating, led to the game-winner. Danton Heinen pounced on the cough up and beat an unsuspecting Alexandar Georgiev, who was brilliant in relief stopping 19 of 20 shots.

After the game Rangers assistant captain Chris Kreider took to the podium to discuss the loss.

Kreider, who has been one of the Rangers most consistent and best players in all three zones had to pause before answering the question as to what happened in the game.

“I don’t think we were playing together, especially at this point in the season,” Kreider said as he was trying to contain his disappointment. “Effort is not something you question. It’s a matter of working smart, not just hard. Good learning experience for our group, first period at least. First road period in the playoffs. Obviously, liked the response, but there’s been moments over the course of the year where we’ve put ourselves in positions like that and have been able to claw back. But that’s not something you can do in the playoffs. Something we have to rectify and rectify quickly.”

The 30 year-old has been with the Rangers for his entire career spanning 10 seasons. He also knows a little something about what it takes to win in the playoffs having been a member of the excellent Rangers teams that made it several Conference Finals and the Stanley Cup Final in 2014.

“[We] started playing together [in the second period]. Got out of our own heads and started connecting the dots. Establish the forecheck. Started working smart, not just hard,” he explained about what worked in the middle frame. “Easiest way to play defense is by making them play defense. We were able to roll four [lines] and get in on them to force turnovers. That’s something we need to do for a full 60 [minutes].”

Kreider has 2 goals, 2 assists, and 4 points in three playoff games this season. For his career, he’s registered 26 goals and 43 points in 83 postseason contests.

When you look at this series, it’s really hard to argue with a single thing Kreider said.

The bottom line is that even though the Rangers have played three games, which should be nine periods, they’ve actually played almost 12 full periods.

Of those 12 periods, the New York Rangers have won four of them. The Pittsburgh Penguins have also had the advantage in four periods, with the key being the OT in Game 1 and the third period of Game 3 as the major differences.

There could be an argument made that the Rangers were robbed of a Game 1 win after video review overruled a called goal on the ice by Filip Chytil with 3:10 remaining in the contest. But that’s spilled milk at this point and not going to help anyone.

It’s time for the Rangers to stop trying to wow us all with their offensive brilliance and listen to Chris.

Get back to playing the type smart hockey they displayed for most of the season. Look at Louis Domingue as if he’s Patrick Roy or Martin Brodeur in goal and just get the puck to the net to score hard-nosed goals.

That’s what the Penguins did.

They banked one in from behind the net to open scoring just a minute in. They then screened Shesterkin to get their power play scores and went to the net for their fourth and fifth goals. Simple hockey.

The Rangers need to listen to their coach and to Chris Kreider. Start playing together for a full game and the rest will take care of itself. 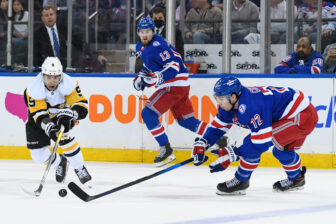 Catch up on all the NHL Playoff Action from Saturday. The Avalanche are now one win away from a series sweep over the Predators. Plus the Capitals, Penguins, and Stars all grab series leads. Read more.