The New York Rangers head to Pittsburgh to continue their opening round playoff series against the Penguins.

With things all knotted up at one game each, the last coaching change now belongs to Penguins coach Mike Sullivan. In the first two games at Madison Square Garden, he made some changes on the fly to get his top line with Sidney Crosby against the Rangers Kid Line as often as he could.

It is certainly going to be something to watch in the next two contests for the Blueshirts as the road team must send their line out first for face-offs.

The Kid Line is comprised of Alexis Lafrenière (20 y/o), Filip Chytil (22 y/o), and Kaapo Kakko (21 y/o). They’ve done a solid job for the Blueshirts so far in the postseason.

Although all three have failed to yet register a point, they did score a crucial goal with a hair over three minutes left in Game 1. The goal was wrongly disallowed after video review. Had it stood, the Blueshirts could very well be up 2-0 in this series.

“I think they played good and created some scoring chances,” coach Gerard Gallant said on Friday. “I was talking to Laffy today, I said ‘You know, you guys played well, you guys played really good hockey’. For a kid line going up against the lines they are playing against, I’m real happy with them.”

The trio is going to be tested over these next two games but will simply need to continue to play the way they’ve been playing– with speed.

Indeed, the Penguins will try and get Crosby or Malkin’s line against them as often as possible. It will be up to Gerard Gallant to play the Kid Line with a top four defense pairing. Have the kids out there on the road with say, Jacob Trouba and K’Andre Miller, would make things just a bit easier in the defensive zone for them. 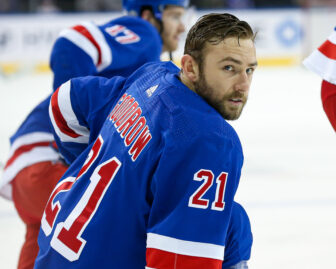 Also Read:
Report: Barclay Goodrow out for rest of Rangers series vs Penguins

The 2021-22 OHL season was an incredible one for New York Rangers 2021 first-round draft selection, Brennan Othmann.

The 19 year-old captain of the Flint Firebirds registered 50 goals and 97 points in 66 games, scoring 4 goals in his last game to hit the 50 goal milestone.

Prospect guru, Craig Button had this to say recently about Othmann:

“Brennan like a lot of players had significant disruptions in their development. He has been a major factor in the success of Flint. I think his game is more like that of Jason Robertson.”

The Dallas Stars selected Robertson in the second round of the 2017 Draft. He’s another big winger playing in his second season in the NHL (his first full season). This season, the 22 year-old was excellent for Dallas with 41 goals and 79 points in 74 games.

Not a bad comparable if you ask me.

Othmann is now carrying over his tremendous regular season to the playoffs where he helped the Firebirds into the second round. They won Game 1 on Friday 5-3 over the Sault Ste. Marie Greyhounds with Othmann picking up a goal and three assists.

Thus far in 8 playoff games, he has 5 goals and 9 points.

The talented prospect signed his entry level contract with the New York Rangers in August.

The NHL Playoffs continue tonight with 4 pivotal Game 3’s including the NY Rangers and Pittsburgh Penguins. Get all the info you need here.