NY Rangers must carry momentum into Game 3 against Penguins 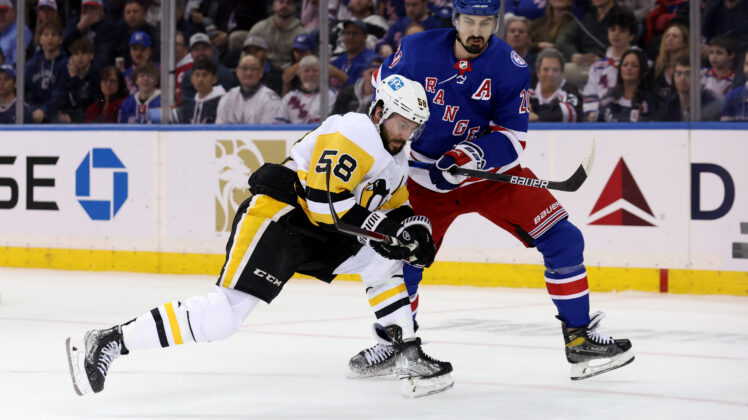 After a long Game 1 against the Pittsburgh Penguins, the New York Rangers rebounded with a powerful effort in Game 2 of the series to the tune of a 5-2 victory.

The Rangers continue to epitomize resiliency coming off the heels of 4-3 triple overtime loss, a game where they weren’t as consistent as they could’ve been. Game 2 looked more like a playoff game for the Blueshirts.

Now that the Rangers have a playoff win under their belt, they must carry the momentum forward.

Momentum will matter for young Rangers

There has always been the question of whether momentum can truly carry from game to game. In the playoffs, it has been the case on many occasions. The Penguins will likely come out flying in Game 3, and the Rangers will have to be ready.

The Rangers played a good first period in Game 1 before getting away from the things they were doing well in the second period. Their game lacked pace for stretches, and it seemed as if they were watching more than playing in those times. They did recover and played a more purposeful third period and overtime sessions but just couldn’t get the goal they needed.

Well, they did but a controversial ruling after a video review took away Filip Chytil’s potential game-winner late in the third period.

In Game 2, the Rangers maintained a sense of urgency throughout. They put on more consistent pressure and were tighter on defense. They outhit the Penguins 40-27 which was crucial considering the importance of physicality in the playoffs. It was a combination of these elements, along with special teams, that helped them secure the win.

The Blueshirts need to do more of the same on Saturday. They will not be able to sit back especially with the Penguins expected to apply intense pressure. Maintaining a high pace of play, continuing to play physically, and having power play success will be keys moving forward.

Also Read:
Report: Barclay Goodrow out for rest of Rangers series vs Penguins

Contributions from up and down the lineup

Igor Shesterkin has been the Rangers’ best player through the first two games which is not surprising considering what he’s done all year. Artemi Panarin and Chris Kreider have also been strong. Andrew Copp has two goals and Frank Vatrano has a goal and two assists so far, so these two continue to be valuable as they have been since they were acquired at the trade deadline.

K’Andre Miller has also proven reliable and has looked stellar through his first two playoff games. He played 44:28 in the triple overtime extravaganza, being relied on more heavily after Ryan Lindgren was injured. He played responsibly and didn’t look like this was his first experience in the postseason. He continued his solid play in game two, picking up two assists.

The Rangers have a number of players tasting playoff action for the first time. Alexis Lafrenière started to truly settle into the NHL this season and was really starting to figure it out towards the end of the year. His offensive production went up and he didn’t shy away from physicality. If he can get going in the playoffs, that would elevate the Rangers’ game as well. But Lafrenière is playing on the “Kid Line” with Kaapo Kakko and Filip Chytil, so it will understandably take them some time to adjust. It will be a learning curve just as it was in the regular season, especially for Lafrenière and Kakko.

Overall, the Rangers looked like a legit playoff team on Thursday night, beginning to prove doubters wrong. The goal now should be maintaining momentum and just sticking to what they’ve done well. If they can do this, they could be a real contender sooner than expected.

Note: All stats come from nhl.com and hockeyreference.com.

The NHL Playoffs continue tonight with 4 pivotal Game 3’s including the NY Rangers and Pittsburgh Penguins. Get all the info you need here.