It was a night of firsts for many. Starting with a kid from Queens, a rookie first round pick, and a veteran winger. When the game was over, the Rangers fittingly took sole possession of first place in the Metro Division.

Chris Kreider scored twice, including an empty-netter, and Braden Schneider also tallied in his NHL debut for New York. The Rangers improved to 2-2-0 on their season-high, five-game trip that wraps up Saturday in Philadelphia.

Kreider, who ranks second in the NHL with 12 power-play goals this season, scored the first short-handed marker of his 10-year NHL career at 10:25 of the first period.

Kreider and Mika Zibanejad skated from their own end and picked up steam when reaching the San Jose blue line, turning it into a two-on-one break. Zibanejad fed Kreider in the left faceoff circle, and the winger put a wrister through Hill’s legs, with the goalie getting a piece of the shot before the puck trickled over the goal line.

Adam Fox also got an assist on the goal.

Kreider completed the scoring by tapping the puck into an empty net with 28 seconds remaining, with an assist going to Kevin Rooney. It was his 200th goal of his NHL career.

After the game, Kreider was asked which milestone meant more to him, the shorthanded goal or his 200th career marker.

“Shorthanded,” he quickly answered. “I’ve wanted that for a long time.”

Earlier in the evening, Kreider was announced as an All-Star.

Schneider scored his first career goal at 1:27 of the second period, taking a pass from Ryan Strome in the high slot and putting a wrister past a screened Hill. Filip Chytil also was credited with a helper.

Shesterkin, who improved to 16-4-2, was making his first appearance since Jan. 2 and hadn’t had a full practice with the Rangers since Jan. 5. After getting activated from the coronavirus list earlier in the day, he logged his third shutout of the season and the fifth of his career.

“The whole day I was quite jittery,” Schneider said. “I couldn’t really sit still. My nap wasn’t too great. I came to the rink and same thing, I had nerves and I just tried to stay in the moment. When I got on the ice for warmup, it became a little bit more real. Then I don’t think it hit me until my first shift of the game. I felt like after that I settled in and I got a little bit more confident as the game went on.”

Schneider, 20, had nine points (all assists) in 24 games with the Pack this season. The 6-2, 202 lbs defenseman is a physical presence on the blue-line that likes to hit hard and often.

The Saskatchewan native was drafted by the Rangers in the first round of the 2020 NHL Draft. New York moved up to select him 19th overall by exchanging their first round pick (22nd overall) and a third round selection with Calgary.

A lot credit needs to go Chris Morehouse, the Rangers Director of North American Scouting. Forever Blueshirts has learned he pushed hard for then GM Jeff Gorton to trade up to ensure his selection. 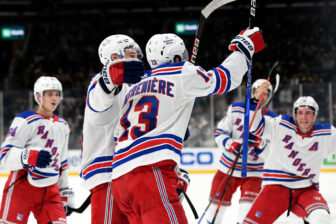 Anthony Greco, 28, signed as an unrestricted free agent on October 9th, 2020. The native of Queens, NY has scored 23 points in 26 games for the Wolf Pack this season. Last night, in his second NHL game of his career, he lived out a dream.

As a young boy, Anthony grew up a Rangers fan. Now he was finally playing for his favorite childhood team and was a key contributor in the win. Greco was tenacious on the forecheck, strong on the back check, and nearly scored on two occasions.

“It’s pretty special for me and my family,” Greco said. “Some of my favorite memories was going to games with (my dad).”

His father Paul Greco was a firefighter that passed away due to 9/11 related illness. The victory was not only special for the Greco family but also for the FDNY.