The New York Rangers have had an active off season as this week they’ve made three important moves.

First they signed Igor Shesterkin to a 4 year-deal. Chris Drury also got first round pick Brennan Othmann to ink his ELC, and plucked Ryan Martin from the Detroit Red Wings to take over as Assistant GM and Wolf Pack GM.

Of course, the biggest question remains; “will the Rangers make a big trade?”

Is the Jack Eichel trade to the Rangers dead?

Things are getting worse between the Sabres and Jack Eichel. The disconnect between the two sides seems irreparable. Eichel’s arguments against the organization were recently reinforced by former teammate Robin Lehner, who stated the Sabres medical staff mishandled his injury.

Recently, there’s been some mixed buzz about a Rangers and Jack Eichel deal with Steve Valiquette implying something was imminent on Twitter. That has not come to pass, but what it did bring out was a report from Larry Brooks that states, the Blueshirts were not seriously interested in bringing in the injured 24 year-old center.

The latest on Jack Eichel consists of no more than the ongoing blizzard of contradictory tales and innuendo posted on social media, some of which has come from the account of an MSG-Network analyst who is friendly with Drury. The Post reported via Twitter on Friday that the GM last week had been telling agents that he had never expressed serious interest in trading for Buffalo’s disaffected center and could not understand why the Rangers have been consistently linked to Eichel.

This is odd because for over a year Bob McKenzie, Elliotte Friedman, Darren Dreger, and Pierre LeBrun linked the Rangers to Jack Eichel. According to them, the Rangers were not only interested but placed calls and even made an offer.

Is this just gamesmanship by Drury?

Even so, the Sabres seem to be playing hardball not only with any team asking about Eichel, but with him and his agents. There’s some growing rumblings that the Sabres may very well drag this out heading into training camp and beyond.

If the Rangers are interested in may behoove them to move on.

The biggest storyline starting to take shape is how will Gerard Gallant set his lines for the upcoming season. Let’s first rundown key moves made so far.

So far, all of Chris Drury’s moves have been to beef up the bottom six and balance the lineup.

The signing of Patrik Nemeth is to stabilize the Rangers third pair defense. He is expected to be paired with top prospect Nils Lundkvist, and will help mentor him.

Shesterkin’s deal, while slightly high for a goalie with less than a full season under his belt is going to be worth it in the long run. The hiring of Ryan Martin is a good one as he fits well into what Chris Drury is trying to do with revamping the team’s philosophy and draft strategy to more North American players. 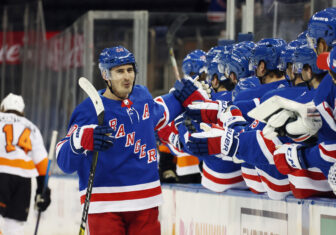 Barclay Goodrow and other Grit guys were big winners this summer. Read more.