The New York Rangers will be taking on the NJ Devils tonight and the Boston Bruins tomorrow. Head coach Gerard Gallant told the media that these next two games will be about experimenting with some different line combinations and defense pairs.

Then in the final two preseason games, we will be privy to what the opening night roster will look like. Let’s see what is on tap for tonight.

This one is a little interesting and is more about seeing what Kravtsov can do in a top six position. In his first taste of preseason action, Vitali was on a line with Goodrow and Chytil, but it was all thrown out of whack once Goodrow was sent off for a 5-minute major.

It looks like Gallant is committed to pairing Goodrow with Chytil. A little crash to go with some flash. Gauthier is being given a similar look as Kravtsov. Only difference here is in Gauthier’s situation, he’s probably being showcased for a trade.

So far, in two preseason games these lines have been experimental and it continues here. What is a little eyebrow raising is Barron on a 4th line instead of McKegg. Maybe the Rangers just wanted to keep him paired with Development camp linemate Pajuniemi. Either way, Barron has an uphill battle for the 4th line C with Kevin Rooney looking like a lock.

A lock to start on opening night.

This one is certainly interesting, but I believe Patrik Nemeth is a lock to be the third LD this season and Lundkvist his partner. My guess is this is more for Tinordi to win that 7th D spot.

Zac Jones has been excellent and would likely make a lot of other NHL defenses. He could be knocking on the door, but with Miller, Lindgren, and Nemeth locked in on the left side it doesn’t make sense for Jones to sit on the bench. He and Schneider will be the top pair down and Hartford. 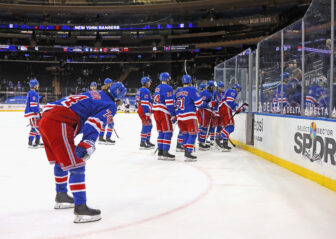 Also Read:
How to watch all the New York Rangers games this season

The Canucks are close to signing their RFA’s. Strome not worried about trade talks, and more. Read here.