The New York Rangers took a tough loss against the Carolin Hurricanes on home ice yesterday. With a quick turnaround set for tonight, they won’t have any time to dwell on the negatives.

While the Blueshirts and Flyers are greatly separated in the standings, both teams will be motivated heading into their meeting Wednesday night in Philadelphia.

The game will be a national television broadcast on TNT.

New York Rangers look to bounce back vs Philly

New York (47-21-6, 100 points) will look to regroup from Tuesday’s 4-2 home loss to the division-leading Carolina Hurricanes and ignite their push for the top spot in the Metropolitan Division, the moribund Flyers (23-39-11, 57 points) will try to rebound after a humiliating 9-2 road defeat to the Washington Capitals.

New York, which saw its three-game winning streak snapped, is four points behind the Hurricanes. The Rangers and Hurricanes both have eight games remaining in the regular season.

“We came out hard. We competed. We just came up a little short,” Rangers defenseman Adam Fox said. “We’re just going to shake it off and move on.”

The clash was tied 1-1 heading into the third period, but Rangers coach Gerard Gallant said his team lost momentum in the middle frame.

“The second period was the difference — they had too much time in our zone, too much puck possession, they were out-bumping us, but we learned some lessons,” Gallant said.

As disappointing as the result was for Rangers, it came with a huge milestone. Forward Chris Kreider became only the fourth player in Rangers history to score 50 goals in a season, tying him with Vic Hadfield for third all-time. Only Adam Graves (52) and Jaromir Jagr (54) are ahead of him with 8 games remaining on this campaign.

“I think it would mean a lot more if we found a way to win the game,” Kreider admitted. “But it’s something that I’ll appreciate. It’s just hard to appreciate right now.”

As proud as he was to join the prestigious 50-goal club, Kreider said he was happy it was in the books so his teammates could concentrate on more important quests.

“I could feel guys looking for me,” said Kreider, who said he believed players were trying to set him up for the goal instead of making the best play. “It’s better for the whole team now that we can go back to playing hockey and taking what the other team gives us.” 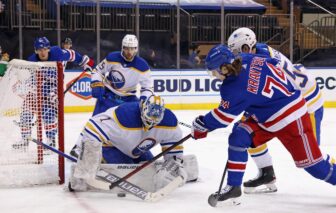 Filip Chytil did not play again on Tuesday and remains day-to-day per the coaching staff. Prior to the game, Gallant did note that he was very close to returning.

When he comes back, I would expect Barclay Goodrow to slot down on the fourth line with Ryan Reaves being the most likely scratch or possibly Dryden Hunt. That will depend on the matchup as the coach recently hinted. A more physical team could get Reaves over Hunt.

Earlier this week, when he was asked if he’d rest some players down the stretch his response indicated there would be appropriate consideration.

“We’ll play it one game at a time and if someone needs a rest,” Gallant said. “We’ve got no issues putting someone else in. We’ve got lots of good players here.”

The Flyers have lost three of their past four and have just two wins in their past nine games, but a beatdown of Tuesday’s magnitude should snap to attention those who are going through the motions of what’s been a disappointing season.

“You don’t give up nine goals by just one area of your game lacking, so there was a number of areas tonight,” interim coach Mike Yeo said. “It’s extremely disappointing, but the good news is we’ve got a chance to respond (against the Rangers).”

Philadelphia’s No. 1 goalie, Carter Hart, left the game after the first period due to a lower-body injury, and forward Cam Atkinson, who was playing in his 700th NHL game, also sustained a lower-body injury in the opening period. There was no word whether either would be able to play against New York. 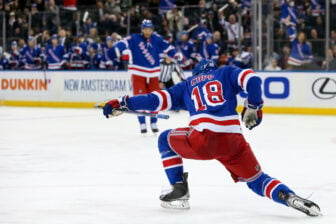