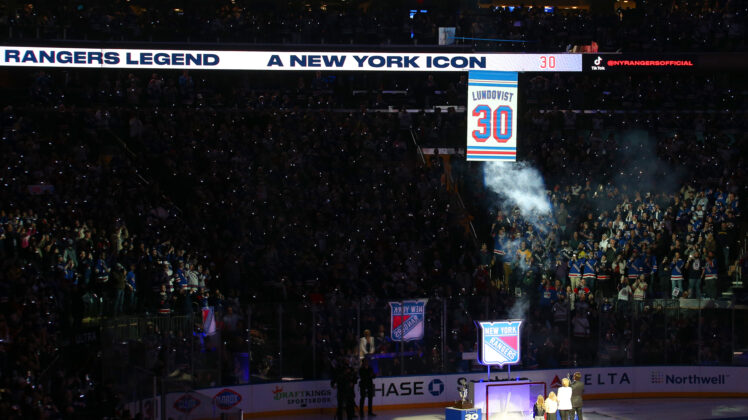 Jan 28, 2022; New York, New York, USA; New York Rangers former goalie Henrik Lundqvist watches with his family as his banner is raised to the ceiling during a ceremony to retire his number before a game against the Minnesota Wild at Madison Square Garden. Mandatory Credit: Brad Penner-USA TODAY Sports

The New York Rangers honored Henrik Lundqvist by retiring his #30.

The ceremony began with New York Rangers great goaltender Mike Richter getting the fans in the building ready for the festivities. He introduced a tribute video with greats from the hockey, sports, and celebrity world congratulating him.

Sam Rosen was the master of ceremonies and introduced some of the 10 members who have their numbers retired in attendance. Brian Leetch, Adam Graves, Mike Richter, and Mark Messier all came out to a standing ovation.

Next up were Henrik’s mother and father, followed by his sister and twin brother. Hank’s wife and children would come out next and set up the moment.

As chants of “HEN-RIK” rained down, Henrik Lundqvist came out tapping his heart and waving to the Garden Faithful with watery eyes. He kissed his wife and children, shook hands with the heroes of 94, and hugged his family before sitting down to a video paying homage to his amazing career.

Sam then spent several minutes rattling off his amazing accomplishments on the ice including being the winningest European-born goalie in history. He was also acknowledged for his charitable work that is highlighted by The Garden of Dreams and Henrik Lundqvist Foundation.

Former teammate, Kevin Weekes took over for Sam Rosen to talk about Hank’s greatness. He recalled a story of friends playing in Sweden that called him up and said, “‘Weeksie, this guy’s good!'” At the time, Weekes was the Rangers starter and was getting a warning about the team’s new prospect in net.

“All the greats play the Garden, but very few have played and dominated the way you have,” he said in closing. “Next stop, the Hockey Hall of Fame.”

Now it was time to hear from the man of the hour, Henrik Lundqvist.

Hank told the fans how the Garden and its fans both scared and inspired him. He recalled coming over from Sweden and his intense preparation that made pregame conversations with teammates brief.

The camera then panned to Mika Zibanejad and Chris Kreider who smirked at each other. Henrik caught a glimpse of that on the Jumbotron and laughed too.

Henrik continuously called his career a journey and expressed gratitude for the night. “I’m so happy that I get an opportunity to say thank you,” he said. “It’s been an amazing experience.”

Then came the moment.

Henrik, along with his wife Therese and their two daughters walked the carpet to the end of the ice. There was the Vezina Trophy right, Steven MacDonald Award left, and in the middle the Rangers logo.

With a blanket of smoke, Henrik’s number 30 appeared from behind and rose to the Garden rafters. Henrik smiled, teared up, and looked at his family with the gratitude he spoke so much of.

The ceremony ended with the heroes of 1994 handing Hank his jersey one last time. 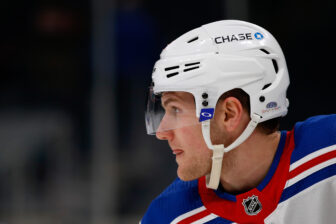