New York Rangers may be overloaded at right wing next season

The New York Rangers had a very difficult time finding viable right wing options for much of last season. Trading first-liner Pavel Buchnevich due to cap concerns for Sammy Blais and a 2022 2nd-round pick was only made worse when Blais tore his ACL just 14 games into the season.

Head coach Gerard Gallant tried moving Chris Kreider and Alexis Lafrenière to right wing, but neither was really comfortable there. He gave Julien Gauthier an opportunity, which never panned out.

Things got even tougher with Kaapo Kakko landing on the injured list multiple times and missing 41 games. That led to Barclay Goodrow and Dryden Hunt playing top six minutes with Artemi Panarin and Ryan Strome. Which obviously was not what either grinder was brought in to do.

Ultimately, GM Chris Drury made two big trade deadline acquisitions that filled the gaps on the right side. Trading for Andrew Copp and Frank Vatrano finally gave the Rangers depth at right wing leading to a run to the Eastern Conference Final.

Despite both Copp and Vatrano’s pending free agent status, the New York Rangers could find themselves overloaded at right wing next season.

They’ve already signed Vitali Kravtsov to a one-year, one-way deal. That forces them to give him a roster spot next season or potentially lose him for nothing to waivers if they send him down. Additionally, Sammy Blais was extended for another season and could play his off wing.

The Rangers also have Ryan Reaves, a favorite of Gerard Gallant, signed for one more season. Even if his role is reduced, he’s expected to still get the lion’s share of games as the fourth line right wing.

Kaapo Kakko is a pending RFA this summer with signs pointing to at least a two-year deal. Once that contract is done, that will give the Rangers four decent right wing options.

Gallant also has Hunt and Goodrow as options to plug on the right if needed.

Alexis Lafrenière has a lofty goal in mind for next season with the New York Rangers— to play in the top six. The 20 year-old did acknowledge that his best chance to do so is playing at right wing with Chris Kreider and Artemi Panarin cemented into the top two left wing spots.

The Rangers first overall pick in the 2020 Draft had a bit of a slow start to the season. Whether it was some inconsistent minutes or shifting to right wing for a spell of games, he could never really get going.

However, late in the season he came on strong and eventually shined in the playoffs by playing a more physical brand of hockey. It also helped that Filip Chytil found another gear and Kaapo Kakko was healthy, as the Kid Line was a factor in the postseason.

When the regular-season ended, Lafrenière potted 19 goals with 39 points in 79 games. He added another 9 points (2G – 7A) in 20 playoff contests.

The strides he made didn’t go unnoticed by his head coach.

“Laffy took a big step physically,” Gallant said. “He was finishing checks harder. He felt he could that in his game. He’s a skilled player. Definitely [see him as top six]. I would be disappointed if he’s not.”

What about Frank Vatrano?

Vatrano, 28, had a nice season and gave the Rangers a lift after being acquired just before the trade deadline. Playing with Chris Kreider and Mika Zibanejad sparked some great chemistry was he was able to score 8 goals in 22 regular-season games and added 5 more in 20 playoff contests.

“I think I have some unfinished business here,” Vatrano said on breakup day. “I want to help this team win a Stanley Cup. Everything here is world class and it’s great to be a part of.”

On July 13, he will officially wrap up a 3-year deal signed with the Florida Panthers for 2.53M AAV. I would assume that he’d at least want a two or three year deal for around $3M to $3.5M. That’s cap space they could use to sign Kakko. So, is there room for Vatrano?

It’s possible depending on what either Andrew Copp or Ryan Strome sign for as the second line center, he could be extended. If the Rangers sign him, then moving Lafrenière to the right wing is less likely.

The Rangers have some tough decisions to make this summer. If they opt to re-sign Vatrano their right wing depth will look like this:

Should Vatrano be too costly, the Rangers will be putting a lot of pressure on Alexis Lafrenière in his third season to be a first line right wing (not his natural position). Although, without Vatrano it doesn’t leave them with too much of a choice.

As for Sammy Blais, he would be perfect as next season’s third line left wing should Lafrenière move up. If Vatrano stays, he will be on the fourth line left wing spot with the potential to fill in on the right wing if needed. 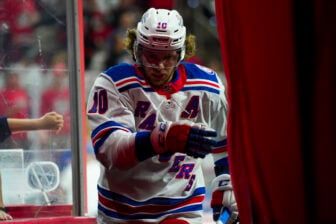