As we prepare for the upcoming season, the New York Rangers roster doesn’t have the same type of uncertainty it’s had in the past. A majority of the players under contract will be in the lineup it’s just a matter of where they’ll play in it.

In this next series of articles, we will start to examine what the Blueshirts lineup may look like by position. We start with the team’s outlook on right wing.

The Rangers right side by the time they were eliminated in the Eastern Conference Final were Frank Vatrano, Andrew Copp, Kaapo Kakko, and Ryan Reaves. Now that the first two left via free agency, Gerard Gallant will have a very different look in 2022-23.

New York had a very difficult time finding viable right wing options for much of last season. Trading first-liner Pavel Buchnevich due to cap concerns for Sammy Blais and a 2022 2nd-round pick had them scrambling all year. It was only made worse when Blais tore his ACL just 14 games into the season.

Head coach Gerard Gallant tried moving Chris Kreider and Alexis Lafrenière to right wing, but neither was really comfortable there. He gave Julien Gauthier an opportunity, which never panned out.

Things got even tougher with Kaapo Kakko landing on the injured list multiple times and missing 41 games. That led to Barclay Goodrow and Dryden Hunt playing top six minutes with Artemi Panarin and Ryan Strome. Which obviously was not what either grinder was brought in to do.

Ultimately, GM Chris Drury made two big trade deadline acquisitions that filled the gaps on the right side. Trading for Andrew Copp and Frank Vatrano finally gave the Rangers depth at right wing leading to a run to the Eastern Conference Final.

Now, the right wing position is going to see a youth movement where the first three lines will be occupied by high first-round picks. Here’s how I believe it will shake out:

A lot riding on Lafrenière, Kakko, and Kravtsov

The former first overall pick in the 2020 Draft has openly stated he wants to play in the top six. He also acknowledged that his best chance to do so is playing on right wing since both Chris Kreider and Artemi Panarin are cemented into the top two left wing spots.

“Laffy took a big step physically,” Gallant said. “He was finishing checks harder. He felt he could that in his game. He’s a skilled player. Definitely [see him as top six]. I would be disappointed if he’s not.”

The second overall pick in the 2019 Draft recently signed a two-year deal with an AAV of $2.1 million per season and will be given a huge opportunity. The time is now to place him on either of the top two lines to see what he can do playing around 18 minutes a night.

Kakko, 21, had a really difficult 2021-22 season thanks to missing 39 games due to three separate injuries. The third-year forward was only able to post 18 points in the 43 matches he played. In the playoffs, he finished with 5 points in 19 contests.

This is his fourth NHL season and he’s only amassed 58 points in his 157 career games. If he struggles again, it wouldn’t be inconceivable for him to be used as a key piece in trade for Patrick Kane or J.T. Miller at the next NHL Trade Deadline.

This is a big opportunity for the ninth overall pick in the 2018 Draft to prove he can play in the NHL. The Rangers signed him to one-year, one-way deal which means they’ll have to place him on waivers and risk losing him for nothing if they opt to send him down. Due to his contract terms, he’s at least going to get a serious long look at what he can to start this season.

Having played 20 games for the Rangers at the tail-end of the 2020-21 season, he scored two goals and added two assists. That experience will be beneficial for both Kravtsov and the Blueshirts for this year.

Truthfully, I don’t think Reaves will play as many games in 2022-23 as he did last season with 69. However, he’s still a favorite of Gerard Gallant and his teammates so expect him to play. This is also the final year of his contract with the Rangers and likely his last on Broadway.

Reaves, 35, registered 5 goals and 13 points while averaging 10:39 per game. He led the team in hits by a wide margin at 279. Defenseman Jacob Trouba was next at 207. Even though I expect his role to be reduced, he’ll get the lion’s share of games as the fourth line right wing. 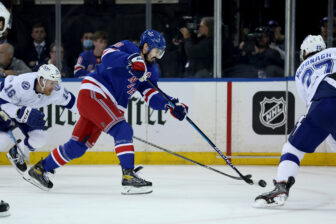 The Rangers re-signed both Sammy Blais and Julien Gauthier to one-year deals. Dryden Hunt is also under contract for one more season. All three have an edge when it comes to fighting for a roster spot simply because Gallant has familiarity with them.

Other possibilities at camp could be rookies like Brennan Othmann, Will Cuylle, and Bobby Trivigno.

For the most part, I already see Blais moving back to the left wing after shifting to the right early in last year before tearing his ACL. Hunt and Gauthier will fight to be the extra forward, with Hunt being my favorite to win it.

When it comes to the rookies, Othmann making it would be great. But if he beats out Kravtsov for a job, it wouldn’t bode well for Vitali’s trade value. Plus, the Rangers can’t send Othmann to Hartford due to age eligibility restrictions. That limitation is really what will send Othmann back to the Flint Firebirds in the OHL.

As for Cuylle and Trivigno, I could see Cuylle making the team out of camp as a third or fourth line left wing. The right side seems very overloaded at the moment. 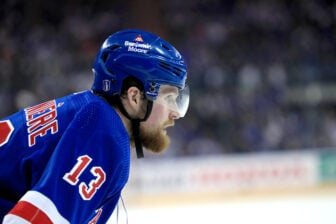