New York Rangers Ryan Reaves misses practice again; team may need to bounce back without him

The New York Rangers are back to work today, and forward Ryan Reaves is not skating again. It is looking more and more probable that he will miss some time; or at least the next game on Friday against the Blue Jackets.

Head coach Gerard Gallant lists Reaves as day-to-day with a lower-body injury. Chris Kreider is also out today due to maintenance.

Monday night, the Rangers played basically with 12 forwards almost the whole game in their loss to the Flames. Reaves appeared to reinjure the same left leg that he sprained in preseason against the Devils. He went to the locker room early in the first period but returned solely because he wanted to sit on the bench and cheer his team on.

“He just wanted to sit on the bench and be part of the group,” Gallant said. “Most of the time you stay in the locker room but he just wanted to be on that bench supporting the guys. You don’t have to do that but Reavo is a new teammate and he wanted to be there to support them. He was disappointed he couldn’t play.”

It’s still possible that Reaves could be green-lit to play tomorrow, but usually if you don’t practice it’s an indication you’ll be a no-go.

“Sloppy,” Jacob Trouba said about the New York Rangers loss to the Flames. “A lot of turnovers fueled their offense.” The veteran defenseman didn’t stop there as he called out his team’s “sexy East to West” game that burned them consistently.

He couldn’t be more right as the Blueshirts coughed over the puck again and again to the tune of 20 times. None was worse than Patrick Nemeth passing one on to the tape of Andrew Mangiapane who tallied twice. Blake Coleman and Mikael Backlund both collected one goal and one assist to lead the visiting Calgary Flames to a 5-1 victory on Monday.

The head coach also didn’t want to focus on the negatives, but he called them out as plain as day.

“We didn’t play well tonight,” Trouba said after the game citing the turnovers. “We’ve got a couple of days in between. Regroup and worry about the next one on Friday.” 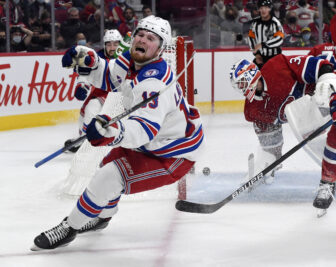 Blackhawks could be in line for several changes soon. Read more.