New York Rangers shut out by Islanders, Gallant says ‘we were horsesh*t’ 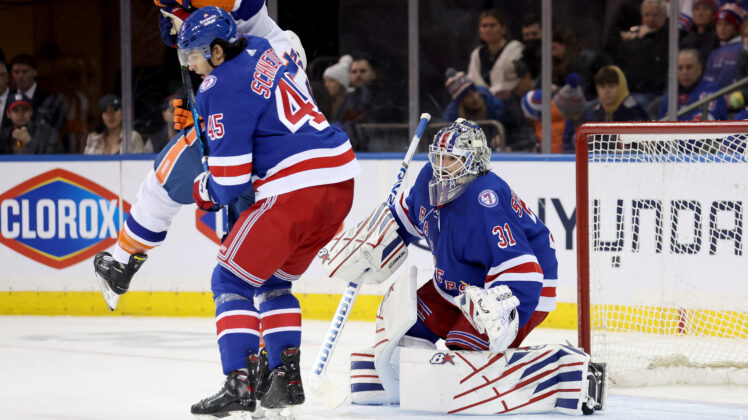 The New York Rangers were at the Garden to take on their crosstown rivals the New York Islanders.

What ensured was an absolute dud and the Rangers head coach didn’t mince words.

After winning four straight, the Rangers strayed far from their identity in listless and aimless performance.

“We move the puck up we’re a pretty good team,” Gallant continued. “We start dancing with it, turning it over and that’s what you get.”

Mathew Barzal collected a goal and an assist, Seymon Varlamov made 27 saves and the visiting New York Islanders scored early in each period in a 3-0 victory over the New York Rangers Friday night.

Barzal scored for the second straight after going without a goal in 15 straight games. His 14th goal of the season 2:47 into the third also marked his 300th career point.

Barzal helped the Islanders (31-27-9, 71 points) beat the Rangers for the second time in two weeks and get their third straight win overall.

Varlamov made seven saves in the first period, 12 in the second and eight in the third. He recorded his second shutout of the season and 36th of his career.

Casey Cizikas and Matt Martin also scored for the Islanders, who improved to 11-4-1 in their past 16 games.

Igor Shesterkin finished with 15 saves as the Rangers (44-20-5, 93 points) saw a four-game winning streak halted and dropped to 8-3-0 in their past 11 games. New York also remained five points behind the first-place Carolina Hurricanes in the Metropolitan Division and one ahead of the third-place Pittsburgh Penguins

The Rangers and Florida Panthers strong March moves them up the power rankings chart. Read more.