According to Frank Seravalli, it is a one-year deal with a very affordable $1.55 million AAV.

Halak, 37, posted a 4-7-2 record in a limited role with the Vancouver Canucks last season. The key stats were his .903 SV% and 2.94 GAA in limited action behind Thatcher Demko.

Halak also knows what life is like playing in the Eastern Conference and has gone to war with the Rangers over the years as a member of the Islanders and Bruins. Matter of fact, Halak is 24-9-1 for his career against the Rangers. By far the most wins against any team he’s faced (two teams tied at 15).

Backing up an elite starter is nothing new to him. The Canucks’ Demko is a workhorse leaving Halak with only making 17 appearances. He would certainly play more in New York, but any extended time as a starter would not be optimal for the Rangers.

Also, Frank Vatrano is officially done with the Rangers as he signs with the Anaheim Ducks. 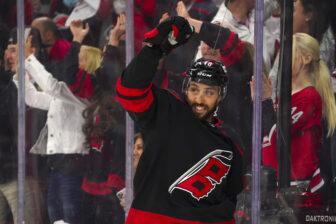 As NHL Free Agency kicks off a new report regarding Patrick Kane and the Chicago Blackhawks has surfaced indicating he will be staying put– for now.

Pierre LeBrun spoke with agent Pat Brisson noting that his clients, which also includes Jonathan Toews and Seth Jones, will wait for the dust to settle before deciding on their futures.