The New York Rangers 6-0 loss to the Calgary Flames on November 6th has become a distant memory. A lesson was learned in the next game against the Panthers, where they almost blew a 4-1 third period lead but still found a way to pick up points.

That was followed by their first real break of the season. Four days off so they could finally get invaluable practice time. Three more wins later and the Rangers temporarily jumped into first place before the Hurricanes beat the Golden Knights to reclaim it.

Rangers pick up another win

Chris Kreider scored his team-leading 12th goal of the season as the New York Rangers defeated the visiting Montreal Canadiens 3-2 Tuesday night. It was their fourth consecutive victory and eighth game out of nine with at least a point.

Kreider snapped a 1-1 tie at 3:50 of the second period. He broke out of his own zone on a four-on-two break and made a cross-ice pass to Mika Zibanejad, who fell to his knees in the neutral zone but was able to regain his skates in time to take the pass and keep his teammates onside. Zibanejad made a return pass to Kreider as he was charging toward the left post and he tipped the puck past Primeau.

Kaapo Kakko and Julien Gauthier also scored for the Rangers. Goaltender Igor Shesterkin, who had to leave Saturday’s victory against Columbus in the third period after taking a knee to the head and was checked for a concussion, returned to the net and showed no ill effects in making 31 saves.

“I have been waiting for those goals, just going to the net and ‘Bread’ or Strome, they’re going to find me, and I just have to shoot it to the empty net,” Kakko said. “Sometimes it’s so easy like that.”

The game ended with some acrimony. Montreal’s Brendan Gallagher was assessed a roughing penalty and a 10-minute misconduct following a faceoff with 28 seconds remaining when he sucker-punched New York’s Barclay Goodrow. Anderson and the Rangers’ Jacob Trouba fought just after the final buzzer. 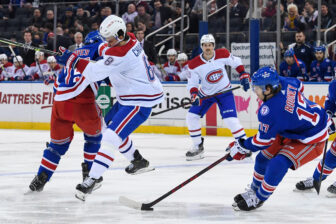