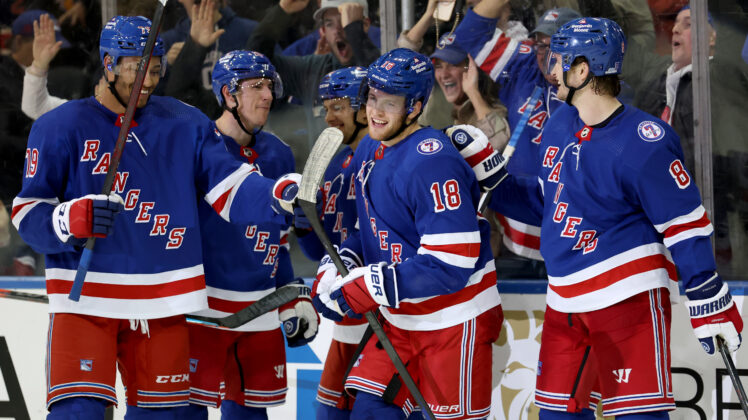 The New York Rangers are on the cusp of clinching their first playoff berth since 2016-17. A win over the Ottawa Senators or the Islanders losing in any fashion to the St. Louis Blues on Saturday will seal the deal.

For info on how to watch the New York Rangers on TV, check here.

As the focus shifts from making the playoffs to whom they may play, we also take a look at the potential lineup.

Here’s several key post trade deadline storylines to keep an eye on as we head towards the playoffs.

On Friday, the team announced that Tyler Motte suffered a significant upper-body injury and there was no timetable for his return. As we await the news, the projected lineup assumes he will miss the start of postseason action which begins on May 2.

Filip Chytil is considered day-to-day, and both Kaapo Kakko and Kevin Rooney are expected back soon. All three will factor into the lineup.

Based on the latest roster news, here’s a potential look at what the Rangers playoff lines and pairings could look like:

Dryden Hunt and Justin Braun would be your extra forwards. If Tyler Motte makes it back for the playoffs he slots in on the leftwing on the fourth line, likely bumping Ryan Reaves out of the lineup.

Next season, the Rangers will have only around $12.5 million to fill out their roster. All that cap space they enjoyed at the NHL trade deadline evaporates once Mika Zibanejad’s $8.5 million and Adam Fox’s $9.5 million contracts kick in.

That really is not a lot to work with, which makes you wonder who will get moved out after this season. The Rangers are not bringing back Alexandar Georgiev, so they will need to spend at least $1 to 1.5 million on a capable backup. If they can get someone to take Patrik Nemeth’s full $2.5 million for the next two seasons, that will help.

Outside of Nemeth, there isn’t a player under contract that the Rangers could trade without sending shockwaves through the team.

And they still have to decide if they are going to sign Ryan Strome or Andrew Copp. It will be almost impossible to keep both and fill out a competitive roster.

Strome, 28, is making $4.5M on his current deal and is due a nice pay increase. Artemi Panarin’s favorite center would likely fetch well over $6M if he hits the open market. Of course, a deal of that size will hinder the Rangers cap maneuverability and make them prone to future offer sheets.

The Rangers are still talking with Strome about an extension but there hasn’t been any reportable progress to date. With Copp coming off a contract that has an AAV of $3.64M, he may be more inclined to a deal in the Rangers sweet spot of around $5M per season.

It’s an intriguing dilemma for Chris Drury as both are capable of playing in the middle.

The Rangers are cap crunched in 2022-23 and have to plan for Kaapo Kakko’s next deal this summer. They also have to reserve money for Alexis Lafrenière and K’Andre Miller in 2023-24. If Strome is willing to sacrifice money for security, maybe something can be done.

Otherwise, we could already be looking at his replacement.

After 2018 1st round pick (9th overall) Vitali Kravtsov refused assignment to Hartford and exiled himself to the KHL, there’s been very little by way of trade talk. The 22 year-old has just 4 points in 20 NHL games and his value is at an all-time low. That was proven by the fact he’s still a member of the team after the Trade Deadline.

Early reports indicated that Drury wanted another top prospect in return, but no one was willing to do that. It’s looking more and more like a second or even a third round pick at the draft is what Kravtsov will garner for the Rangers. 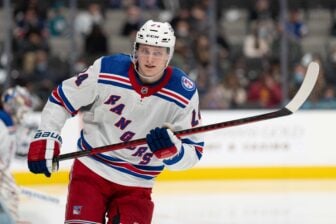