The New York Rangers have been playing .500 hockey over their last 8 games and really need to put together a string of wins. There’s no better time then now as they face a potential first round opponent the Pittsburgh Penguins on Friday night at the Garden.

Tonight’s game will be the first of three contests as the two teams jockey for playoff positioning. New York currently sits in third place, three points behind Pittsburgh with a game in hand.

Here’s several key post trade deadline storylines to keep an eye on as we head towards the playoffs.

There’s been a lot of talk in recent days with the new acquisitions of Frank Vatrano, Andrew Copp, Tyler Motte, and Justin Braun about what the lineup should look like. Gerard Gallant spoke to this yesterday after practice, especially considering that the current lineup will change again once Kaapo Kakko and Kevin Rooney return from injury.

Based on the roster, here’s a potential look at what the Rangers playoff lines and pairings could look like:

Ryan Reaves would be a fourth line replacement, likely bumping out Motte or Rooney depending on the matchup. Braden Schneider could play over Braun, but it’s unlikely Braun will be able to move to the left side.

Ryan Strome is making $4.5M on his current deal and is due a nice pay increase. Artemi Panarin’s favorite center would likely fetch well over $6M if he hits the open market. Of course, a deal of that size will hinder the Rangers cap maneuverability and make them prone to future offer sheets.

One source told me back in December, if the term is right, Strome may accept $5.75M. This is going to be a very interesting negotiation and a discount to stay isn’t out of the question.

The Rangers are cap crunched in 2022-23 and have to plan for Kaapo Kakko’s next deal this summer. They also have to reserve money for Alexis Lafrenière and K’Andre Miller in 2023-24. If Strome is willing to sacrifice money for security, maybe something can be done. He will turn 29 in July so the Rangers must also be careful with the number of years and any no-trade protection.

Larry Brooks noted that preliminary numbers had been exchanged between both parties. Unfortunately, there’s been no forward progress to report on a possible extension. New York also opted not to trade Strome at the NHL Trade Deadline, which is a risky move since he could walk away for nothing.

Of course, if the Rangers can’t come to terms on a new deal with Strome, there’s always the possibility that newly acquired forward Andrew Copp could take that position. Other rumors include a trade for Winnipeg Jets center Mark Scheifele in the offseason.

Claude Giroux will also be a free agent this July, so there seems to be plenty of options.

The New York Rangers are run by Chris Drury, who has a penchant for players that have been in the US National Development Program and local college stars.

In his recent trades leading up to and at the deadline, he brought in Frankie Vatrano, Andrew Copp, and Tyler Motte. All three were members of the US program with Vatrano and Copp teammates of Rangers alternate captain Jacob Trouba.

The Blueshirts may also have their eye on an undrafted college star from UMASS, captain Bobby Trivigno. This season, he has 48 points in 36 games which includes 20 goals.

Trivigno, an undrafted 23-year-old forward hailing from Setauket, N.Y., has been on the Rangers’ radar for quite some time. He would’ve participated in the Rangers’ development camp this year if not for NCAA rules that prohibit players from missing school for NHL events, but a source said the pesky 5-foot-8 competitor has already met with members of the Blueshirts’ front office. If the stars align for Trivigno, a contract with the team he grew up rooting for could be waiting for him at the end of his senior season.

After 2018 1st round pick (9th overall) Vitali Kravtsov refused assignment to Hartford and exiled himself to the KHL, there’s been very little by way of trade talk. The 22 year-old has just 4 points in 20 NHL games and his value is at an all-time low. That was proven by the fact he’s still a member of the team after the Trade Deadline.

Early reports indicated that Drury wanted another top prospect in return, but no one was willing to do that. It’s looking more and more like a second or even a third round pick at the draft is what Kravtsov will garner for the Rangers. 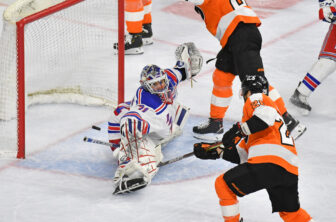