The New York Rangers and the host Toronto Maple Leafs will both be chasing a second consecutive victory on Monday night.

The Rangers opened a four-game road trip Saturday with a 3-1 win over the Montreal Canadiens, while the Maple Leafs defeated the Ottawa Senators 3-1 to avenge a loss on Thursday.

At Montreal on Saturday, Alexis Lafreniere scored the go-ahead goal to give Gerard Gallant his first victory as the Rangers’ coach.

Lafreniere, the No. 1 pick in the 2020 NHL draft, is from nearby Saint-Eustache, Quebec.

“Obviously to score in Montreal, it’s pretty fun,” Lafreniere said. “It’s hard to imagine anything better. It was a really nice effort by the whole team.”

“He’s still a really young kid but he’s a talented kid, and we asked him to play a better two-way game and he’s responded to that,” Gallant said.

The Rangers were without center Ryan Strome (COVID-19 protocol) Saturday and during the first period lost right winger Kaapo Kakko to an upper-body injury. He was listed as “day-to-day” and placed on IR which requires him to miss at least 7 days. Center Morgan Barron was recalled from the Hartford Wolf Pack on Sunday.

With Strome out, center Filip Chytil started on a line with Artemi Panarin and Kakko.

“(Strome is) such a smart player and he obviously is a big part with (Panarin),” center Mika Zibanejad said. “That’s tough. And when that happens, you have to have someone step up in that role and I thought everyone contributed.”

Left winger Sammy Blais returned to the lineup after missing one game with a lower-body injury.

“It’s tough when you lose top players during the game, especially top players like Kaapo,” Gallant said. “But that’s part of the game and the guys dug in and dug down and other guys got a little bit more ice time.” 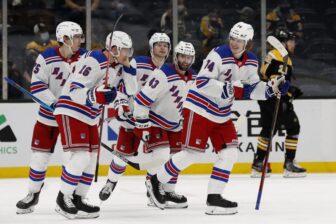 Matthews was playing on a line with Mitchell Marner and Nick Ritchie during practice on Sunday.

“It’s huge. He’s one of the best players in the world and it’s tough not seeing him in the games because you see how dominant he is in practice,” coach Keefe said. “He’s excited, the players are excited, the fans should be excited.”

Maple Leafs backup goaltender Petr Mrazek (groin) is expected to miss 14 days. Michael Hutchinson was recalled from the Toronto Marlies of the American Hockey League to back up Jack Campbell.

Toronto will be playing a U.S.-based team Monday for the first time after playing 72 straight games (regular season, playoff and preseason) against Canadian teams since January. COVID-19 restrictions resulted in a Canadian division last season with no regular-season games against U.S. opponents.

“It will be great to hear two anthems again,” Marner said.

The family of the late Jimmy Hayes wanted to share his story in hopes that it will save lives. Read More.