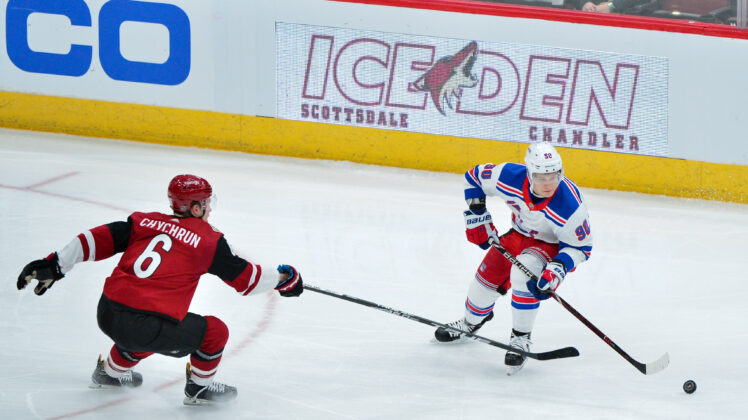 We often look at the NHL Trade Market with an eye on rentals. A rental, for the uninitiated, is a player on an expiring contract that will become an unrestricted free agent at season’s end.

For the New York Rangers, there’s plenty of options that will fit the bill come the Trade Deadline on March 21. At forward you have San Jose’s Tomas Hertl and Vegas’ Reilly Smith. On defense, Seattle’s Mark Giordano would make a great fit.

However, limiting yourself to just the rental market is shortsighted. Especially for the Blueshirts whose window to win the Cup is just beginning to open.

Arizona Coyotes defenseman Jakob Chychrun is one of the hottest names on the NHL’s trade market.

Chychrun, 23, has just 7 points in 26 games but the Yotes’ this season and is dealing with an injury. Last year was a breakout for him with 41 points in 56 games. The left-handed rearguard has three years left on a cap friendly deal of $4.6 million.

On a recent Sportsnet’s 32 Thoughts segment, Jeff Marek provided an update on the situation. Which includes the fact that at least 10 teams have made offers.

Marek also added the Los Angeles Kings, St. Louis Blues, and Anaheim Ducks have the prospects and desire to make that deal.

Chris Drury has a contender on his hands but cap constraints will make it difficult to keep key free agents and RFAs. They are overloaded with young players and prospects and would love someone like Chychrun to pair with Jacob Trouba. Rumblings indicate the Blueshirts are likely one of those 10 teams.

The package would be significant, but the Rangers could do it since they are overloaded with young players and prospects.

What if a deal that centered around K’Andre Miller, whom Chychrun would replace, along with Filip Chytil, and a first round pick sound? That would not address the team’s third pair issues, unless Arizona would consider Zac Jones or even Nils Lundkvist over Miller.

Miller has the size, speed, and talent to be a top-four defenseman. But for where the Rangers are right now, Chychrun paired with Trouba would be a 1A-1B pairing to Adam Fox and Ryan Lindgren. It’s fits the ready to win now mode.

Plus, from a cap standpoint it makes even more sense over the next few seasons. Miller’s ELC will expire in 2023.

Tyler Toffoli would be perfect

We know that there are some solid options on the rental market for a forward. However, there is a player with some term on his deal that makes sense to me. I’m not the only one who sees it.

“One could make this case that they could try to get another top-six winger,” Weekes pondered to the NY Post. “Could they want somebody like a Tyler Toffoli maybe, from Montreal?”

Montreal Canadiens forward Tyler Toffoli is very similar to Chris Kreider in how he plays and how he scores. Only difference is he can play right wing.

Toffoli, 29, has a good contract with an AAV of only $4.25M, plus he doesn’t have any trade protection. This would allow the acquiring team flexibility to move him after this season. That is beneficial to the Rangers who will feel a cap crunch next season when Adam Fox’s and Mika Zibanejad’s big extensions kick in.

Toffoli has recorded 17 points (five goals, 12 assists) in 26 games this season and would be a great fit with Ryan Strome and Artemi Panarin.

Also Read:
Why the New York Rangers are likely not suitors to sign Evander Kane