New York Rangers looking to venture into the unknown, a series lead

The New York Rangers are looking to go into unfamiliar territory tonight. As the puck is set to drop on Game 5 in Raleigh against the Carolina Hurricanes, they are on the verge of grabbing their first series lead of the playoffs.

“It doesn’t matter what happened in the past it’s what you do going forward,” Gerard Gallant said on Wednesday. “We played them two really good games in their building last week. We didn’t come away with wins but you have to keep working, keep playing– it’s going to be a real good Game 5.”

Carolina has yet to win a game on the road in these playoffs, with that being said they also haven’t lost one at home. The Hurricanes have outscored their opponents 22-7 at PNC Arena and have a stellar PK working at 94.1% on home ice.

The Rangers on the other hand have one win on the road in the postseason and that came in Game 6 against the Penguins. They are just 1-4 in these playoffs away from Madison Square Garden.

Igor Shesterkin is back to being the team’s MVP as his numbers in this series are exceeding what he posted during the regular season.

“He’s been in the zone from Day One since I’ve seen him,” Gallant said. “He steps up and he’s only a young kid, but by goalie standards the way he’s playing has been incredible.”

“I think we’re confident. Staying even-keel was important after the two games in Carolina where both were right there but we didn’t produce,” Copp said. “We just need to block all that out and stay with our game. We need to ride this momentum in Carolina.”

Adam Fox, who is one of the leaders on the team and is second for the Rangers in playoff scoring had some things to say about Copp and the other trade deadline acquisitions (Frank Vatrano, Tyler Motte, and Justin Braun).

“In the playoffs and in the regular season they came in and were big factors,” he said. “Upfront you can see what Copper and Frank are able to do. You can see the bolt of energy from Motter when he’s in and he’s an underrated part of what we’ve been doing in the playoffs. And having Brauner back there, he’s a veteran guy– a calming presence. Obviously some great acquisitions.”

The New York Rangers stand a very good chance to put themselves in a great position if they can win on Thursday night in Raleigh.

“We haven’t really been up in too many games or in a series,” Copp said with a smile. “If we ever get [a series lead] we’ll see how we handle it. I think the never-die mentality has been in this team from Day One, and I’ve kind of felt that from walking in a couple of months ago.”

If the Rangers can take Game 5, they will have an opportunity to close it out on home ice this Saturday.

Right now the Carolina Hurricanes are reeling after these two losses.

“What’re you going to do? You have to keep getting the chances. I’m happy that we’re creating offense,” Canes head coach Rod Brind’Amour said. “(Shesterkin) played well. You have to give him a ton of credit. But the (poor) start is what did it to us.”

It’s time for the Rangers to find that killer instinct they will desperately need if they want to make noise beyond Games 3 and 4 at the Garden. 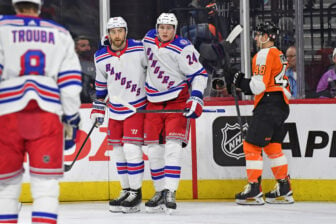 Also Read:
Barclay Goodrow is skating, who sits for Rangers when he returns?

The latest rumors regarding the Montreal Canadiens, the Pittsburgh Penguins, and the Boston Bruins. Read more.