Barclay Goodrow is skating, who sits for Rangers when he returns? 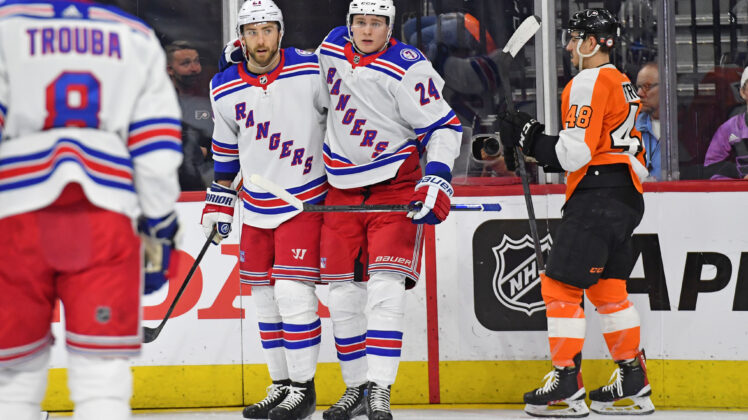 Barclay Goodrow is making strides back from a believed fractured foot suffered in Game 1 of the NHL Playoffs against the Pittsburgh Penguins.

According to head coach Gerard Gallant, he’s skating and “going in the right direction.” While he has yet to take part in a full practice, one has to wonder who he would replace in the lineup?

That will depend on where Gallant sees Goodrow making the most impact. Is it in a third or fourth line role? How much will he be able to handle coming back from an injury that prevented him from skating for weeks?

All will be taken into consideration when the time comes.

Goodrow was labeled week-to-week by Gallant before Game 2 of the Penguins series. That announcement indicated the seriousness of the injury. Remember, Goodrow played with a broken hand in the Stanley Cup Final last season to give the Lightning their second straight championship.

Last week, Gallant noted that Goodrow had yet to begin skating but gave a glimmer of hope that there was a possibility for him later in Round 2 against the Hurricanes.

“He hasn’t skated yet but we’re not counting him out for this series,” he said. “He’s not going to start the first couple of games but we’ll see how it goes.”

Goodrow, 29, had a great first season with the Rangers after a trade and sign in the summer. In 79 games, he recorded 13 goals, 20 assists, for 33 points. All were career highs for the rugged forward.

“He’s a big player and we’re going to miss him,” Jacob Trouba said. “We love the depth of our team. It’s not like he’s gone. He’s still around the rink– next guy up and hopefully he gets back as soon as he can.”

Who comes out for Goodrow?

So when Goodrow is available, who comes out?

For me, there are three possible candidates and they were all on the fourth line for the Game 4 win. Let’s start with the most likely candidate, a young Finn selected second overall in 2019.

Kaapo Kakko: The 21 year-old has been excellent in these playoffs from the standpoint of being strong with the puck down low and maintaining zone time. Unfortunately, that has not translated to points. With just two points in the playoffs, he is a prime candidate to give way to the defensively more responsible Goodrow.

Ryan Reaves: The 35 year-old tough guy is certainly more valuable than Kakko as a fourth-liner. As the playoffs get a bit nastier, it is nice to have his physical presence in the lineup. Of course, Reaves has no points in these playoffs and there’s an argument that a fourth line with Kakko is more dangerous.

Kevin Rooney: The 29 year-old has two points in these playoffs but plays a big role on the PK. Goodrow could easily take over as the 4th line center and on the PK for Rooney, but I find it hard to see Gallant taking out a center and penalty killer from a playoff lineup.

In the end, when Goodrow is ready, Kaapo Kakko really does seem like he’ll be a healthy scratch.

The latest rumors regarding the Montreal Canadiens, the Pittsburgh Penguins, and the Boston Bruins. Read more.