The New York Rangers will face the Pittsburgh Penguins in Round One of the Stanley Cup Playoffs.

The Blueshirts ensured the matchup by beating the Washington Capitals on Friday night by a 3-2 score. Had the Rangers lost, their first round date with the Penguins would be set as Pittsburgh beat the Blue Jackets 5-3 a little later.

Here is the schedule between the Metropolitan Division second and third place teams for their Round One matchup.

NYR Gerard Gallant: “You know what you got with Pittsburgh. You know Crosby, Malkin, and Letang but that doesn’t worry us. I like our team and I like what we’re going to bring. We’re ready for this series.”

PIT Mike Sullivan: “We’re going to play the game that gives us the best chance to win. That’s what we’ve tried to do all year long. We’ll certainly go to work here over the next couple of days and see if there’s anything we can do to be better against the Rangers.”

The Rangers played Pittsburgh extremely well this season, with their only loss coming in Pittsburgh by a score of 1-0. Igor Shesterkin started all four games and posted a stunning save percentage of .960 with a GAA of 1.01 and a shutout.

Chris Kreider was the offensive catalyst with 6 points (3G – 3A). Mika Zibanejad added 6 points (6A) of his own to drive the offense. Artemi Panarin recorded 4 points in the series (1G -3 A).

On the Rangers injury front, Artemi Panarin and Andrew Copp missed the last two games but are expected to be ready for Game 1. Tyler Motte is out indefinitely with an upper-body injury. Ryan Lindgren hobbled off the ice late in the third period with an apparent left leg issue but no update has yet been provided. He remained on the ice for the Blueshirts Off Their Back ceremony.

For the Penguins, #1 goaltender Tristan Jarry is listed as week-to-week with a foot injury. Jason Zucker is day-to-day with an undisclosed injury. 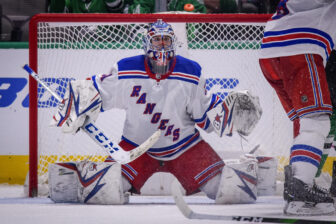 NHL Playoffs Round One Matchups

Here is a look at all 8 playoff off matchups.

Catch up on all the latest NHL rumors buzz including what might happen with the Golden Knights after being eliminated from the playoffs. Plus the Rangers are going hard to extend Andrew Copp and much more. Read here.