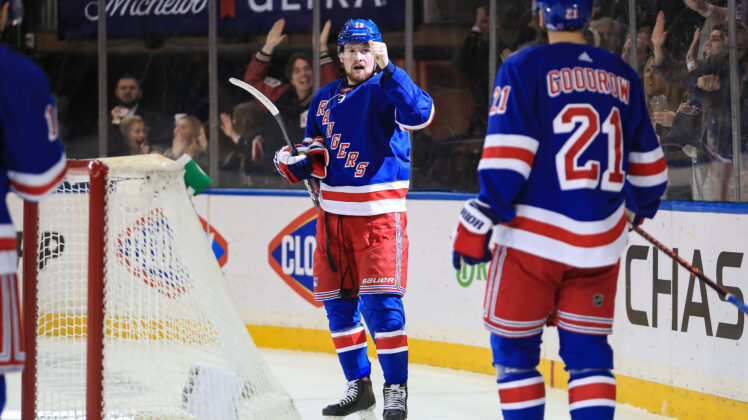 The New York Rangers (52-24-6) didn’t want to go into the playoffs on a losing streak. Heading into the regular season finale against the Washington Capitals they came out hard and earned a big win.

Alexandar Georgiev, who got the nod in goal as Igor Shesterkin rests for the start of the playoffs had a stellar performance.

“We got 110 points and we should be real proud,” Gerard Gallant said. “It’s quite an accomplishment.”

Artemi Panarin and Andrew Copp did not dress for the Blueshirts. Alexander Ovechkin remained out with an upper-body injury.

Filip Chytil opened the scoring with a nifty little move to the net that surprised Ilya Samsonov. Kaapo Kakko picked up an assist for his first point since returning from his latest injury. Braden Schneider also recorded a helper.

Unfortunately, the lead was short lived as Justin Schultz tied it just 35 seconds later. His shot caught Alexandar Georgiev moving and sneaked under his arm.

The Caps would take the lead just 72 seconds later thanks to a power play blast by John Carlson.

Alexis Lafreniere would tie the game with under five minutes to play in the second period working a beautiful passing play with Ryan Strome. It was his 19th goal of the season. Schneider would register the secondary assist on this goal as well.

“I would have loved to see him score his 20th,” Gallant said of Lafreniere. “He finished really strong and that’s good for us and him.”

In the third period, the Rangers would take the lead with a pretty goal by a gritty player. Dryden Hunt took a pass from Kakko and went inside – outside – and then back inside to tuck it by Samsonov. Adam Fox picked up his 63rd assist of the season on the goal.

With 8:50 second to go, Tom Wilson was denied by Georgiev on a breakaway to preserve the lead.

Late in the game, Ryan Lindgren got tangled up with a Caps player who appeared to step up his skate. He hobbled off the ice but stayed on the bench. Lindgren did not play another shift.

On the sequence, Barclay Goodrow was sent off for hooking with 2:24 left in the game. New York was able to kill it off and win their final game of the season.

“Tonight was pretty sloppy but it was nice to finish with a win,” Gallant noted.

With the victory, the Rangers will face the Pittsburgh Penguins in the first round of the playoffs starting on May 2.

“You know what you got with Pittsburgh. You know Crosby, Malkin, and Letang but that doesn’t worry us,” Gallant said. “I like our team and I like what we’re going to bring. We’re ready for this series.” 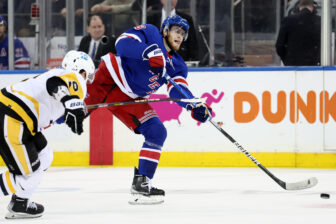 Alex Ovechkin, Juuse Saros, and Tristan Jarry are all out with injury heading into the NHL Playoffs. A look at some of the most notable injuries around the league. Read More.