As we continue to crawl through the slowest part of the New York Rangers offseason awaiting for training camp to open, news has been limited.

It was nice to get some excitement with the signing of Kaapo Kakko to a 2-year bridge deal with an AAV of $2.1 million. Per CapFriendly, the Rangers have $1.8 million in cap space.

However, once you play with the lineup using CapFriendly’s ArmChair GM tool you’re left with only $933,531 for a 22 man roster.

While it is early to project the team’s lineup, based on last year’s roster and the salary cap only a few spots are in doubt. Assuming the Rangers are ready to give Alexis Lafreniere a top role, he or Chris Kreider could make the switch to right wing on the top line.

The 20 year-old acknowledged that with both Chris Kreider and Artemi Panarin occupying the top two left wing slots it won’t be easy to get on the top two lines. His best chance is to move to the right wing, which is something he’s been open to doing.

Dryden Hunt will act as the 13th forward.

On defense, I think this one is fairly obvious with Zac Jones earning the first crack at being the third-pair left defenseman with Braden Schneider. The Rangers also opted to keep Libor Hajek around and he’s likely going to be the 7th defenseman.

In his first full season as a pro with the Hartford Wolf Pack, he was their leading scoring defenseman with 35 points in 52 games. This past season, he also played in 12 games with the Rangers earning two assists.

In goal, Igor Shesterkin will look to repeat his Vezina winning performance with new veteran backup Jaroslav Halak. The Rangers also signed Louis Domingue, who will start with the Wolf Pack and be the first call up if there’s an injury or should Halak struggle.

“Competition with any goalkeeper should spur you on, because without it there is no professional growth,” Shesterkin said in a Russian interview. “Now our team has signed Jaroslav Halak. I am sure that the competition will also be serious, plus you can learn something from him, as he is a very experienced goalkeeper. And I wish Alexander Georgiev only good luck.” 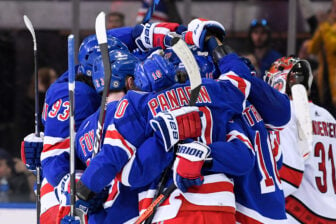