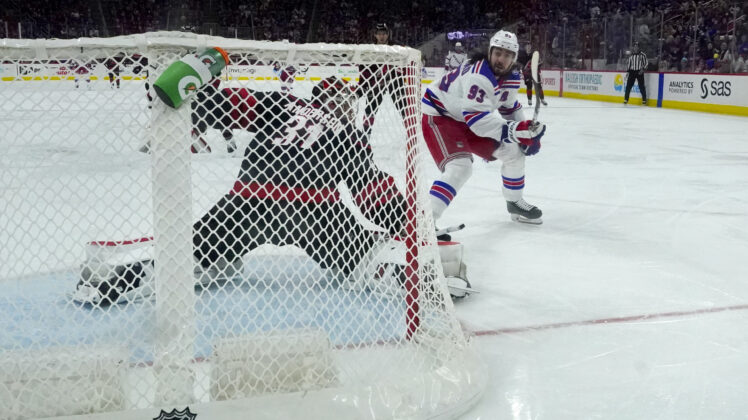 The New York Rangers vs Carolina Hurricanes playoff series will be a battle between the top two teams in the Metropolitan Division.

During their four regular season contests, the Rangers had a hard time dealing with the Hurricanes aggressive forecheck. Carolina easily won the regular season series and dominated the Rangers in their lone victory as well. If not for Alexandar Georgiev’s 44 save performance the Canes would’ve swept the matchup.

“They’re a very aggressive team. They play north hockey and put pucks to the net,” Gerard Gallant said on Monday. “We have to counter that when they make mistakes and challenge them with odd-man rushes. We know what they’re going to bring and they know what we’re going to bring… I think it’s going to be a hell of a series.”

Chris Kreider and Mika Zibanejad were the Rangers offensive stars during the regular season. Each had five points with Kreider posting 4 goals and Zibanejad having 4 assists. Artemi Panarin struggled mightily against Carolina with just 1 assist, and Fox only had 2 helpers.

For the Hurricanes, Sebastian Aho steamrolled the Rangers with 7 points (3G – 4A) and former Rangers defenseman Tony DeAngelo added 1 goal and 1 assists from the blue-line.

This one is too close to call because the Hurricanes system seems to find goals from any player at any time. Overall, the Rangers have the more gifted players.

The New York Rangers were one of the top defensive teams starting around March until the end of the season. A really good time to tighten things up defensively. That did not carry over into Round 1 where they struggled in their own zone.

On the season, the Blueshirts finished second in goals allowed at 2.49. However, the Hurricanes were the top defensive team only allowing 2.44 goals per game. Believe it or not, the Rangers were close to the Hurricanes in shots allowed giving up 30.8 versus 28.2.

Overall, the Rangers have the better individual defensemen led by Adam Fox. However, the Canes unit of 5 works like a machine giving them the edge.

In the post season the Rangers have the worst goal against at 4.14 per game of the remaining teams. The Hurricanes are at 2.86.

Rangers goalie Igor Shesterkin is the clear favorite to win the Vezina Trophy this season and he is also up for the Hart Trophy. The 26 year-old posted a 36-13-4 record to lead the team to the playoffs and home-ice advantage in round one. His .935 SV% and 2.07 GAA top the league. Against the Hurricanes he struggled going 0-2-0 with a bloated GAA of 3.63 and a .883 SV%.

During the season, Frederik Andersen led the team with a 2-1 record versus the Blueshirts posting a .914 SV% and 2.01 GAA. However, he was injured late in the season and did not dress for a single game against the Boston Bruins. Back up Antti Raanta won that series but did not face the Rangers this season. If Andersen can’t play, the Rangers have a clear advantage.

In the playoffs Igor Shesterkin has certainly struggled with a .910 SV% and a 3.66 GAA, although he seems to be coming around. The top candidate to win the Vezina posted a .917 SV% and a 2.93 GAA winning three straight to complete the 3-1 deficit series comeback.

When it comes to special teams the New York Rangers were great scoring 55 power play goals and adding 8 shorthanded goals, while only giving up 2. Meanwhile, the Carolina Hurricanes were the best PK unit in the NHL. The Rangers ability to score shorthanded could be a factor.

Here’s a look at how the special teams are performing in the playoffs.

The Hurricanes were able to get by the Boston Bruins without starting goaltender Frederik Anderson. Can Antti Raanta outplay the New York Rangers Igor Shesterkin? That’s just one of the questions coming into this series.

Both teams needed a Game 7 to ouster their opponents with the Rangers storming back from a 3-1 series deficit to take down the Penguins. There’s just a level of resiliency in that young group that makes me think they can pull over another big playoff win.

If the Rangers can find a way to counter the Hurricanes aggressive forecheck, they should have what it takes to beat them in 7. 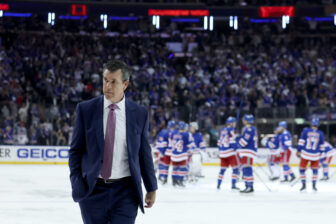 Brayden Point is doubtful for the Tampa Bay Lightning as they start their series against the Florida Panthers, plus latest injury news. Read More.